Mercenaries 2: World in Flames is the sequel to 2005's Mercenaries: Playground of Destruction, released in North America on August 31, 2008. It was developed by Pandemic Studios for the PlayStation 3, Xbox 360, and Windows, while Pi Studios developed the PlayStation 2 version, with the publisher being Electronic Arts for all games. The game is set in Venezuela, with Jennifer Mui, Mattias Nilsson, and Chris Jacobs returning. 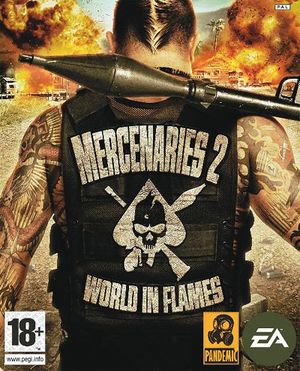 Features new to Mercenaries 2 include destructible environments, co-operative mode, a fire effects engine that allows the player to ignite things such as oil or foliage, improved artificial intelligence for non-player characters and the ability to swim. The game is powered by the Havok 4.5 physics engine.

New vehicles have been added, such as boats. Hijacking now consists of a small minigame, ranking in difficulty relative to the vehicle being hijacked. Another feature is the ability to switch from driver to gunner on demand. One other new addition to this iteration of Mercenaries is the ability to build a Private Military Company (PMC) and recruit mercenaries into it. There are two confirmed mercenaries that can be recruited: Eva Navarro, who will act as a mechanic once recruited, and Ewan, who is a helicopter pilot who can pick up valuable objects you may encounter, and can also extract the player if necessary. Also, a new unnamed bomber pilot will be able to be hired, who is the player's source for airstrikes.

The game will feature terrain ranging from urban environments such as Caracas to the Amazon rainforest.

The game features three playable characters, all from the original game: Jennifer Mui, Mattias Nilsson and Chris Jacobs. All characters follow the same storyline that centers on the player's character of choice.

Mercenaries 2: World in Flames is set in August 2010 in Venezuela. The story begins as the player approaches businessman Ramon Solano's villa. The player is greeted by a man named Blanco, who apparently once worked with the player but left him when he stopped making money. In the meeting inside the villa, Solano hires the player to rescue a top Venezuelan Army General named Carmona, one of Solano's friends, who is being held prisoner by the Army after a failed coup attempt. A small faction in his army did not agree with the coup, captured him, and has taken him prisoner in an old colonial fortress on an island off the coast of Venezuela. The player uses weapons and air strikes supplied by Solano to infiltrate the fortress and rescue Carmona. Once Carmona is rescued, however, Solano attempts to murder the player to avoid payment, and to make sure there is no interference with his plans for Venezuela. The player is able to escape, despite being "shot in the ass", and begins to plan revenge on Solano.

Following a second, successful coup by Carmona, he chooses Solano as the "civilian leader of a military government". Solano begins a forceful attempt to seize control of the country's oil supply, which is held by a company called Universal Petroleum, who tricked the former government into giving UP full control of Venezuela's oil. Fierce fighting ensues throughout Venezuela between Universal Petroleum's hired mercenaries and the Venezuelan Army (referred to as the VZ in the game) under Solano's control, resulting in a collapse of the country, driving people from their homes and causing widespread property damage. In response, a rebel group called the People's Liberation Army of Venezuela (PLAV) rises up against both VZ and UP forces. After taking control over Solano's villa, the player establishes his private military company (PMC) and helps the causes of the factions in exchange for money and information on Solano. This includes capturing VZ outposts, 'verifying' high value targets (or 'HVTs'), destroying structures, and doing other work that the faction's forces cannot accomplish.

Upon verifying Blanco and destroying the oil platform that he was on per request of the PLAV, the player learns where Solano is hiding. The player attempts to destroy Solano's hidden bunker at Angel Falls, but fails as it is hardened against normal bunker buster weapons. Shortly after, the player is forced to defend his own headquarters and recruits from Carmona and his VZ troops. After repelling the attack and verifying Carmona, it is revealed that sinking the oil platform triggered an international response to the crisis in Venezuela. A large force of American-led Allied Nations (the AN faction, a parody of the UN) and the People's Republic of China move into the country. The AN is supposedly a peacekeeping and nation-rebuilding force for the war-torn country, but the player finds out that at the center of the operation is a CIA agent named Joyce, who was ordered to secure the oil supply when it became clear that their allies, Universal Petroleum, could not do so. The Chinese Army initially supported the PLAV, hoping that they would come into power and give China oil. When it became clear that the PLAV leader only wanted to stop Blanco and Carmona for personal reasons rather than overthrow the new government, the Chinese began a direct assault into the country. The Allies' and the Chinese' different plans for the oil results in a struggle for control of Caracas and the oil supply.

The player sides with one of the factions and completes contracts for them in exchange for the nuclear bunker buster needed to destroy Solano's hardened bunker. Consequently, the player succeeds in verifying the other faction's leader (Agent Joyce or General Peng), but Solano destroys the HQ of the faction the player allied with a nuclear bomb. The player returns to Solano's bunker in a second attempt to destroy it. After fighting through Solano's defenses, the player uses the nuclear bunker buster to destroy a large portion of the bunker. Solano almost escapes the ruins in a helicopter, before the player hijacks it and kills the pilot. The player confronts Solano and kills him. If the player has captured all of the game's HVTs, prior to capturing Solano, then he is knocked out and captured by the player's character, who calls the faction leader of the side assisted in the battle for Caracas, and informs them of this fact. The end cutscene does not change, however. The game ends with Fiona declaring Solano "Verified" on her laptop and talking about moving to India for their next contract.

The game has been criticized by the Venezuelan government, accusing the U.S. government and Pandemic Studios of trying to drum up support from the American public for a real-life invasion with the purpose of overthrowing Hugo Chávez. Pandemic Studios had previously developed training aids for the US Army. In response to the criticism, the official Mercenaries 2 website includes the following disclaimer, "Pandemic Studios is in the business of entertainment. It has never been contacted by any U.S. government agency concerning the development of Mercenaries 2. All persons, storylines and events are purely fictional and bear no relation to real events. As with any number of games, movies and books, the decision to choose interesting events and locations is purely designed to tell a compelling story, as well as provide a fun and rich experience for the gamer."