Metapod is the next stage of evolution for a Caterpie. It evolves from a Caterpie by setting up string around itself to form a cocoon and staying inside it. This causes Metapod's movement to be limited. A wild Metapod is found a lot less than Caterpie in Pokémon games.

Metapod’s name is probably a combination of "metamorphosis" and "pod". Its Japanese name, Transel, comes from the words transformation and shell. The name Metapod refers to the species as a whole, as well as to individual specimens in the games, anime, manga, trading cards, and other media.

Metapod appear as large, bright-green chrysalis, and only their eyes are visible within. Inside, a Metapod’s body is very weak and tender, making it extremely vulnerable while its shell is still soft. Although the shell quickly hardens to the toughness of an iron slab, Metapod is still at risk, as a harsh impact may damage its soft body inside or even cause it to pop out. For this reason, and to conserve energy, Metapod barely move, instead preparing themselves within its shell for its impending evolution. Its design is based on a typical butterfly chrysalis, most likely closely resembling a Swallowtail butterfly pupa.[1]

Metapod are featured in the Pokémon video game series. Originally in Japanese, but later translated into other languages, the games have sold over 143 million copies worldwide.[2]

Metapod evolve from Caterpie, and can sometimes be caught wild (Viridian Forest and Ilex Forest) in the same locations where Caterpie appear. Wild Metapod are often at higher levels and will evolve more quickly, however, a Metapod caught in the wild will only know Harden as its sole move. In contrast, a Metapod which has been evolved from a Caterpie patiently raised by the player will also remember its Tackle and String Shot attacks. In the first generation games, a Metapod evolved from a Caterpie did not learn Harden, simply retaining Tackle and String Shot, but since the release of the second generation games has learned Harden upon evolution- providing that the trainer lets the Caterpie evolve at level seven.

All Pokémon have specific stat-ratings of the qualities, such as power, speed, and vitality, which help them in battles. All ratings can be improved by certain costly items available in the game.[3] Metapod's statistics are very low, given the fact that it is meant to be a weak pre-evoloution to Butterfree (Which still is not a great battler.) It looses some attack strength compared to its pre-evolved form Caterpie, but gains some more defensive power. Metapod are usually only used in battle to gain the needed experience to evolve into its final form, Butterfree.

Like Metapod's counterparts, Kakuna, Cascoon, and Silcoon, Metapod can evolve extremely quickly compared to other Pokémon (it normally evolves in three levels), and Metapod also appear in the Nintendo 64 game Pokémon Snap, hanging from trees over the River area, similar to the Kakuna in the Tunnel area.

The Pokémon anime series and films are a meta-series of adventures separate from the canon that most of the Pokémon video games (excepting Pokémon Yellow[4]) follow. The anime features the quest of Ash Ketchum,[5] a young Pokémon trainer, as he and several other companions travel around the world with their Pokémon partners.

Ash’s Caterpie evolved into a Metapod in record time. He was then challenged by another trainer, named Samurai. After Metapod won to Samurai’s Pinsir, Samurai sent out his own Metapod. The two stubborn trainers got into a Harden contest, trying to outdo each other and to physically attack due to Metapod's sole technique being Harden, which frustrated Misty to no end. Soon after, a swarm of Beedrill attacked, and Metapod’s shell was pierced as it moved to protect Ash. Despite the short time it had spent as Metapod, however, it evolved and emerged from the shell as a mature Butterfree (Dexter claimed that a Metapod generally evolves into Butterfree within a week of its previous evolution).

The next time a Metapod appears was as one of Bugsy's Pokémon in "Gettin' the Bugs Out". Being surprisingly strong, it took out Ash's Chikorita with relative ease before succumbing to a Thunder from Pikachu.

It is interesting to note that, during evolution, Metapod are one of the very few Pokémon species in the anime to leave behind a remnant of its old form, instead of transforming completely,[6] However, in Pokémon 4Ever (4th movie), Ash, Sammy, Pikachu and Celebi watch a group of Metapod evolving into Butterfree during the night, yet the Metapod evolve the same way all Pokémon evolve, simply by taking on the shape of their next stage. The same thing happens in "Caterpie's Big Dilemma".

In the Pokémon: The Electric Tale of Pikachu! manga, which loosely parallels the storyline of the anime, Ash’s Caterpie evolved into Metapod while they were having lunch with Misty. Later, at the Cerulean City Pokémon Gym, Misty had challenged Ash to win the Cascade badge from her, and Metapod evolved during the match, turning the tide of the battle. In Pokémon Adventures, Yellow was reluctant to let Kitty the Caterpie evolve. In a dire circumstance, though, it finally evolved into Metapod to block a Hyper Beam aimed at Yellow, and then evolved again immediately.[7] 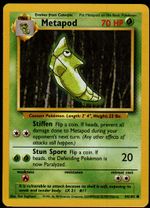 In the Pokémon Trading Card Game, Metapod are a seldom-appearing grass Pokémon, featured on one card each in the Base Set (as well as Base Set 2 and the Legendary Collection), Neo Discovery, Expedition, and EX FireRed/LeafGreen. In all but the base sets, it is less common than Caterpie.