Meteos is a puzzle game for the Nintendo DS. The object of the game is to arrange falling blocks into matching rows of color to create rockets, which will boost all the blocks above it to the top screen. Blocks in the top screen will then be destroyed.

Meteos: Disney Magic, an alternate version of the game featuring Disney characters, was released on February 27, 2007. In addition to the change in themes, this version of Meteos rotates the orientation of the playing field allowing the entire touchscreen to be used, and allows for horizontal block shifts (in contrast to having only vertical block movements).

It was a dark time... The existence of all planets was threatened by one: the evil planet Meteo.

A stream of phantasmagoric matter flowed endlessly from the planet. This matter - called Meteos - crushed life and stole the sparkle of the universe. World after world fell... But then, by chance, three Meteos of the same type aligned. Fusing together, they ignited, firing the other Meteos into space!

A defense strategy was formed: the civilizations of each planet launched counterattacks by fusing Meteos in different ways. Thus the last, desperate stand versus Meteo began. The Metamo Ark - a warship made of Meteos ore - set off as a bastion of hope, with the fate of the entire universe resting on a lone civilization's valor.

The game's main story is fleshed out in Star Trip mode (see below).

Meteos plays similarly to Pokémon Puzzle League (aka Tetris Attack (aka Panel de Pon)). Puzzle blocks ("meteos") fall one by one from the top of the screen, settling in a pile. If the pile pushes the top of the screen for too long, the game is over. This is called a nova.

A numeric score is also computed as you play based on meteos launching, but outside of saving high scores, this is almost always irrelevant. 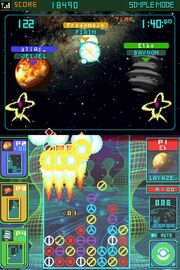 When three meteos blocks of the same type (distinguished by color and symbol) come into contact, they transform into rocket blocks and fire upward. Meteos blocks that were on top of these rockets will, naturally, be pushed up as well - hopefully high enough to be pushed off the screen. The beginner's goal is to simply avoid being suffocated by meteos, and launch them away as quickly as possible.

The player moves meteos blocks vertically, by switching a block with the one above or below it. Using the control pad and A button, they are switched one at a time. However, the suggested method of moving blocks is the stylus - by moving the tip up and down across a column of blocks, you can drag a single block to any point in the column. (Keep in mind that this is no voodoo - the one-by-one switching is still happening, so inadvertent alignments are not only possible, but somewhat common.)

Every meteos block has weight. Every meteos block that is consumed by an alignment contributes to rocket boost. When meteos are aligned vertically, there are three rocket blocks pushing a single column, so the stack tends to achieve escape velocity fairly easily. When meteos are aligned horizontally, there is only one rocket for each column, so there is less thrust. This is where midair alignments come in: meteos blocks can continue to be moved around while airborne, and these subsequent alignments will create even more rocket thrust. However, keep in mind that a second-fusion will only sometimes push the entire stack, and, other times, will instead detach from the floating stack as a new stack of its own. To see if a fusion will split a stack in half, look at the block above the potential ignition. If there will be friction between a non-fused block on the new stack and a block on the old stack, then the whole stack won't split.

Once the player has learned the ropes and begins reaching toward more difficult settings, the challenge is no longer keeping your screen clear, but launching blocks in an offensive manner against your opponent(s): meteos that are launched off the top of your screen will drop onto your opponent's planet as gray garbage blocks. By launching meteos skyward as fast, or in as great number as possible, the idea is to bring your opponent to his knees.

A large part of becoming better and more dangerous at Meteos is learning how to use the speeder. The speeder is activated with the shoulder buttons, or by touching the lower-right corner of the touchscreen. Jamming the speeder almost always makes blocks and stacks fall faster, thus accumulating the materials for your meteos offensive in a quick fashion.

A basic strategy is to try to keep blocks airborne, without entirely launching a stack off the screen, and never letting them settle on the ground. By keeping stacks in limbo, you can effectively negate the threat of losing your own planet, so you can concentrate on keeping the garbage flowing onto your opponent and making him nova.

As time passes in a Meteos match, three things become faster: the rate of falling blocks, the rapidity at which garbage blocks (which don't trigger the screen-ceiling alarm) become real meteos, and the speed of your demise if they reach the top of the screen. So slip-ups become increasingly dangerous over time.

One last action to remember is flicking single blocks up. You do this by dragging the top block of a column upwards, as if to switch it with a block above it. If you flick blocks up to a stack that's in the air, you can either push it up off the screen, or added blocks to it to form a secondary ignition if there aren't enough blocks already. In some levels, flicking blocks up to a stack works very well. If you flick a certain color block up in the air, and flick another of the same color at it, they will collide and explode. (Flicking an item block into another of the same type will have the same result.) This is a good way to trim tall stacks.

There are 32 different planets, plus a Metamo Ark bonus stage (see Planets below), and each one has different variables for gravity, air pressure, rocket power, et cetera... to the point where many planets have very unique gameplay quirks that can drastically affect how they must be played to win.

There are several items in Meteos. These appear randomly (depending on Item Switch settings), and have various effects. Most of them result in the destruction of meteos blocks for your opponent, which impedes their ability to launch against you. Some of them activate powerful rocket boosts, which can help you put or keep blocks aloft. But, even at a High frequency setting, items rarely turn the tide of a match.

The simple concept of the game, played against zero to three computer-controlled opponents. Players can choose between Stock and Time rules: in Stock, each player is allowed a certain number of novas, and the last planet standing wins; in Time, the winner is the planet with the least novas (or in case of a tie, highest score). A Difficulty setting determines how quickly situations become dangerous for players, and CPU Level adjusts the intelligence/skill of computer players (all of them - they can't be changed individually). In addition to the standard free-for-all, teams can be set up, so you can have two-on-two or one-on-three or one-on-one-on-two configurations. Each player's planet can be chosen individually.

This is the game mode that goes along with the Meteos story. Star Trip is a series of matches - almost always seven - pitting the player against some planets on the way to the evil Meteo, and finally confronting Meteo itself. You can choose a home planet for this mode, but the only effect this has on the Star Trip is that you will never fight your own planet. When you fight a planet in Star Trip, you do so using that planet's properties, e.g. you play as that planet. Star Trip also has a difficulty setting.

There are three "routes" in the Star Trip, each having multiple "endings." An ending is a short semi-cinematic screen that shows when you defeat Meteo.
-Straight gives you six planets to fight, then Meteo. The default ending happens when you finish. A second ending happens when you gain at least 500,000 points through the course of the Trip (or finish on five-star difficulty).
-Branch gives you the option of going to any two planets after you finish a match, so while a Trip is still six matches (+ Meteo) long, there are many possible routes and seven different places to fight Meteo. Each of these results in a different ending.
-Multi messes with the Branch concept by introducing missions in each match. If you pass a mission, such as launching a certain number of meteos at once, or completing the match in a certain amount of time, you have the option of choosing where to go; if you fail the mission (this still entails winning the match), you are forced through the lower of the two options. There are three possible endings depending on the routes you take. While matches in Straight and Branch are always one-on-one, in Multi you will frequently fight two or three planets simultaneously.

Choose a planet, and play the Meteos game until you nova.

Meteos supports short-range wireless multiplayer. There are two types of Wireless play, depending on how many game cards there are between the players. Wireless multiplayer plays pretty much like Simple mode, with the exception that you can also engage in verbal and physical warfare with your opponent(s).

Everyone has Meteos! The fastest option if everyone has a copy of the game. Create a "group" and pick up members to start a game, or join an existing group.

Only you have Meteos! A simplified setup for when not everyone has the game: one person selects this option, and everyone else chooses the DS Download Play option from the DS startup screen. Planet choices are limited to the initial four, Geolyte, Firim, Oleana, and Anasaze.

Meteos has 32 planets, 16 items, and numerous sound sets. However, you start the game with almost none of these to use/choose from. These are unlocked through Meteos Fusion.

There are 12 different types of meteos: Air, Fire, H20, Soil, Iron, Zap, Herb, Zoo, Glow, Dark, Soul, and Time. When you launch meteos blocks off the screen, the game records how many of each type were launched. Later, you can use these launched meteos to fuse planets, items, and sound sets (additionally, since Soul and Time are very rare, other meteos can be fused to create them).

There are 32 planets in Meteos, each having their own variation in gravity, boost speed, and block combinations, giving each planet a different feel.

Additionally, after defeating Meteo in Star Trip mode, a game is played on the Metamo Ark while the credits scroll on the top screen. The Metamo Ark stage is more than twice as wide as other planets, making the meteos blocks extremely small.