Meteos: Disney Magic is a puzzle game co-developed by Q Entertainment and Aspect, published by Buena Vista Games for the Nintendo DS. It is the sequel to Meteos, also for the Nintendo DS. Meteos: Disney Magic follows the same basic concept as Meteos, but makes many distinct changes, the most notable being that it features Disney characters as opposed to the various alien species from Meteos.

The player must hold the Nintendo DS sideways à la Brain Age: Train Your Brain in Minutes a Day!, creating a taller playing field on the touch screen. The top screen shows a particular scene, which changes when launching a certain number of Meteos off of the screen.Such scenes include Lilo and Stich, The Nightmare Before Christmas and Pirates of the Caribbean. One of the biggest changes in gameplay is the ability to drag tiles left and right, unlike the original Meteos whose tiles could only be moved up and down. This only applies to Easy, Medium and Hard modes; in Expert mode, only up and down movements are allowed. 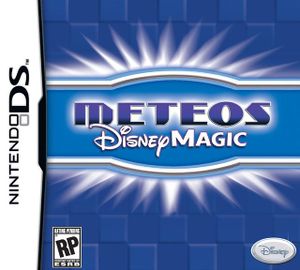 Meteos: Disney Magic has received in general lower scores than its predecessor. Nintendo Official Magazine's review said it that, "if you're after a puzzler that's easy to get to grips with then this is a good choice," but added that, "the original is still the definitive version," and said that the new Disney animations were pointless. IGN's review maintained that the gameplay was less restrictive due to the new horizontal sliding, and also praised how the slider locks, discouraging scribbling on the touch screen, a technique used to make the previous game easier. However, the review criticized it for a lack of online play, and for replacing the alien theme with the Disney theme. Gamespot found the gameplay to be as satisfying as in the previous title, complimenting the ability to move tiles horizontally, though also criticizing it for lackluster unlockable content and that the Disney theme wouldn't be everyone's cup of tea.

Meteos Wars is the Xbox Live Arcade version of the game with a release date of December 10, 2008 for 800 MSP.