The Metroids are fictional creatures within the Metroid universe. 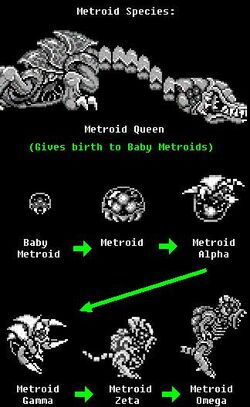 The Metroids were created by the Chozo as a means of eradicating the X Parasite that plagued the planet SR388. Though they were successful in suppressing (but not fully eliminating) the X Parasite, the Metroids eventually killed off the remaining Chozo inhabitants of the planet. Researchers for the Galactic Federation later discovered Metroids on SR388, in a state of suspended animation (most likely a result of a final desperate attempt by the Chozo to keep the Metroids in check.) While studying the creatures, the researches found that exposure to beta rays for 24 hours was all that was needed not only bring the Metroids back to life, but to allow them to asexually reproduce themselves. As the ship made its way back to the Galactic Federation base it was ambushed by Space Pirates who killed the researchers and stole the Metroid cargo. Fortunately, Samus Aran, a bounty hunter working for the Galactic Federation, stopped the Pirates and destroyed their Metroids.

Eventually the Galactic Federation decided to send a team of unarmed defenseless researches to SR388, to make sure there were no more Metroids on the planet, as the creatures are enormously dangerous. When contact with the researchers was lost, a search and rescue team was sent to the planet. They were never heard from again. After that, a special combat group of Galactic Federation Police were sent to SR388. They were also never heard from again. When the Galactic Federation got bored with sending hundreds of people to certain death, they decided call on Samus Aran once more.

Samus arrived on SR388 and eliminated the Metroid Queen and all of her remaining offspring, except for one. The Metroid she saved (referred to as the Baby Metroid) hatched after she killed the Metroid Queen, and because Samus was the first thing it saw, it thought that she was its mother. It helped her escape the collapsing Metroid hive by eating away the walls.

The Baby Metroid was sent to the Galactic Federation for medicinal research, as the Metroids have astonishing regenerative abilities. Though the Metroid can absorb an X Parasite by simply making contact with it, the X Parasite can protect itself by creating an outer shell that can mimic any life form. Because of this the Metroids were created with the ability to sap nutrients out of most life forms by latching their claws onto the victim's skull and then sucking the life force energy directly out of their body—a brilliant move by the Chozo. The Metroids are very robust, and their only known weakness is extreme cold. They were created with radically unstable DNA, allowing them to mutate and take on new forms. This was probably intended to make them efficient hunters of the shape-shifting X Parasite. 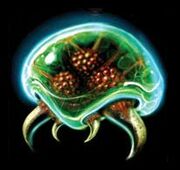 Most Metroids are green. 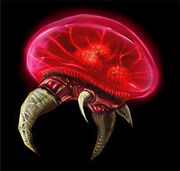 But sometimes they're red.

Though Samus wiped out the only existing Metroid hive and it's queen, both the Galactic Federation and the Space Pirates have made Metroid clones from DNA taken from the Baby Metroid.

There have been several Metroid outbreaks (most of the Metroid games take place during such outbreaks) that were stabilized by Samus. The Galactic Federation considers her to be the only person capable of stopping the Metroids, as only she can harness the Chozo weapon technology specifically designed to fight them. Samus was raised by the Chozo and has Chozo DNA fused in her blood, allowing her to wear a modified Chozo powersuit and use Chozo devices. Probably the most important of these is the Ice Beam, which can freeze a Metroid, making it much easier to destroy. Most of the remaining Chozo have either died out or left the part of the universe wherein the series take place. At the end of Metroid Fusion, Samus realized that her death would mean an eventual unstoppable Metroid outbreak, and that she must preserve her own life at all costs until the Metroids have been fully exterminated. 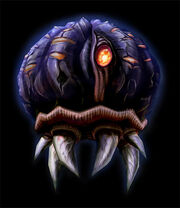 If you see a Dark Metroid, you run. You run your ass off.

The Metroids are rarely seen in their natural state in the Metroid games. Only in Metroid 2: Return of Samus did Samus fight full-grown Metroids. In other games, the Metroids have been exposed to foreign elements that caused them to mutate into various forms. Some forms are immune to ice, but weak to other types of energy. The most notable Metroid mutation is Metroid Prime, a creature created by the Space Pirates by fusing a Metroid with Phazon and Space Pirate weapon technology. Metroid Prime eventually got out of control and the more the pirates fought it, the more it learned to emulate their weapons and fighting styles. Metroid Prime was ultimately terminated by Samus Aran. What was left of Metroid Prime is believed to have become Dark Samus, after having absorbed Samus' Phazon Suit. (In other versions of the game Metroid Prime was brought to Tallin IV by a great meteor)

Since the Space Pirates landed on Aether in Metroid Prime 2: Echoes, Dark Samus wasn't the only Metroid-related creature on the planet. The Metroids the pirates brought with them got loose, of course, and some of them were possessed by the dark Ing. What resulted was probably the most terrifying form of Metroid yet, the Dark Metroid.

In the latest game in the Metroid timeline, Metroid Fusion, Samus Aran was in an accident that required fusion with the Baby Metroid's DNA to survive. She was later sent to the Biologic Space Labs to use her Metroid DNA infused suit to take care of an X Parasite outbreak. The Metroid DNA allows her to absorb an airborne X Parasite by simply making contact with it once its exterior shape-shifted clone body thing has been destroyed. Though the X Parasite appears to be eliminated, Samus found a hidden lab full of Metroids in the Biological Space Labs, which was jettisoned into space soon after her discovery of it. The current location of this lab and the Metroids within it is unknown.

Listed in order of their difficulty.