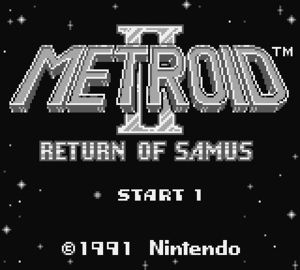 Metroid II: Return of Samus is the second title in the Metroid series that appeared on the Nintendo Game Boy. In Metroid II, Samus Aran returns in an all new adventure to exterminate the Metroids, now venturing to their home planet, SR-388. Instead of the long corridors and doors she had to blast open with her gun, she now had to destroy Metroids in order to progress to the next area.

In addition to blasting Metroids, she also had new skills. The Space Jump allows Samus to jump infinitely in the air. When combined with the Screw Attack, it can destroy any enemies by flying into them. The jump can also be used to access other areas. Other new items include the Plasma Beam, Spazer and the Spider Ball, which allows Samus to climb walls and stick on ceilings while in the Maru-Mari form (Morph Ball). This is the first Metroid game where you get to see the transformations of the Metroids (Alpha, Beta, Gamma, Omega, and the Queen), but later, all of these forms except the Queen made cameos in Metroid Fusion.

Metroid II was more linear than the first game since it was destroying Metroids to progress rather than finding new pathways through exploration. It received good reviews upon its initial launch. Nintendo Power gave it a 4.5/5 and most gaming magazines and websites have a similar opinion. In spite of this, some critics and gamers, looking back after the release of Super Metroid and Metroid Fusion, consider it the weakest title of the series.

There was also a color version announced at the time of the release of the Game Boy Color. Some pictures were shown but the game never saw daylight despite the release of the colorised version of The Legend of Zelda: Link's Awakening.