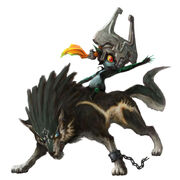 Midna is a character in the Legend of Zelda series.

the guide character in The Legend of Zelda: Twilight Princess. She plays a similar role gameplay-wise as Navi of Ocarina of Time fame, except she's somewhat less annoying. She has the most "spoken" lines in the game, being the only character to actually audibly talk (albeit in gibberish) during dialogue.

Link first meets Midna shortly after being turned into a wolf for the first time. She helps him escape from the prison of Hyrule Castle, which was enveloped in Twilight at the time. Her true motives are questionable at the beginning of the game, thanks to how she seems to care little about the Hylians and enjoys the Twilight. But as the game progresses, she becomes friends with Link and sincerely works with him to stop Zant and Ganon.

Midna is the game's title's "Twilight Princess", being a member and princess of the Twili tribe. She is cursed and turned into an imp when Ganon fuses himself with Zant and runs her out of the Twilight Realm. At the end of the game, Ganon is defeated and the curse is lifted, and she turned back into her true Twili Form.

Midna appears as a playable character in Hyrule Warriors.