The name Misdreavus is a portmanteau from the words "mischievous", which refers to its naughty nature, and "dread".

Another possibility is the name originated from the word "mysterious", indicating the Pokémon's little-known background which is common to all Ghost-type Pokémon. It may also be a portmanteau of "mysterious" or "mischievous" (given its nature) and a variation of the words "dread" or "dream". Its American name was originally going to be "Trillix". Its Japanese name "Muma" may come from the Japanese word meaning "nightmare".

Misdreavus is a moderately-sized, corporeal apparition that somewhat resembles the disembodied head of a human female (though this Pokémon exists in male and female gender). It lacks a nose, has thick, flowing “hair”, and large, yellow eyes with red irises. It appears to wear a necklace of red pearls.

Misdreavus lives deep in dark caves, making it an elusive Pokémon. It projects frightening screeching and wailing noises, as well as creepy, sobbing cries, at enemy Pokémon it encounters in the caves, so as to build up a level of fright strong enough so that the Pokémon will flee. Misdreavus’ pearl necklace apparently serves as its means for feeding by absorbing the fearful feelings of targets for nutrition (compare with Shuppet, a similar Ghost Pokémon that feeds on feelings of anger).

In the event that a human, trepid or otherwise, enters a cave area inhabited by a Misdreavus, the Pokémon will attempt to drive him or her out by biting and pulling at the intruding human’s hair.

Because of its wailing habit and feminine appearance, Misdreavus may be representative of the Irish Banshee.

Misdreavus can be found in Mt. Silver in Pokémon Gold, Silver and Crystal; snagged in Pokémon Colosseum; and caught in the Lost Cave in Pokémon LeafGreen. In all of these cases it is rare. It can also be caught in Pokémon Pearl in Eterna Forest at night.

Misdreavus is notable in several ways as a battler; it was the first pure Ghost-type Pokémon to appear in the Pokémon franchise (Gastly, Haunter, and Gengar from the first generation of games were Ghost/Poison-dual-types). It also has a particularly dangerous moveset known as "Perishtrap"; Misdreavus first uses Mean Look to prevent the opponent from switching, and then uses Perish Song to cause the opponent to faint after three turns. However, Misdreavus' mediocre Hit Points and Defenses make Perishtrapping risky. Some of Misdreavus' attacks, such as Confuse Ray and Protect, can help remedy these potential problems.

Since the introduction of Pokémon Ruby and Sapphire, however, Misdreavus has been overshadowed by Banette and Dusclops, both new pure Ghost-type Pokémon. Banette has high Attack to take advantage of its Ghost-type (a physical-class element), while Dusclops has massive Defenses; Misdreavus possess neither trait. Its special stats are higher than its physical ones though, so it could be somewhat useful in the UU (an acronym for "under used" which is usually used to describe a metagame of competitive battling) environment.

Misdreavus can also be found in "Pokémon Channel" at the exterior of Ruins of Truth under certain time and weather conditions.

Misdreavus also posses a unique move called Pain Split. This causes both Pokémon's health to be set at the average between the two, and this move could be used to stall for the perishtrap technique.

In the new game Pokémon Diamond and Pearl, Misdreavus will evolve into Mismagius with the Dusk Stone. Both Midreavus and Mismagius are exclusive to the Pearl version.

During the Hoenn League, Ash faced a trainer with a Misdreavus. However, before it was beaten, the trainer commanded Misdreavus to use Destiny Bond, and when Misdreavus fainted, Glalie was taken with it.

In "Entei at Your Own Risk", a trainer had a Misdreavus that knew Mean Look, and it was used on Entei. However, Entei used Roar, recalling Misdreavus and allowing the fire-type to escape.

During the Johto League, a Misdreavus got stuck under a log and was rescued by Ash and Gary.

In Sinnoh, a rival of Dawn's named Zoey owns a Misdreavus. She uses it for appeals in Pokémon Contests.

In the Pokémon Special manga, Misdreavus appeared in Volume 10 as one of Morty's Pokémon. 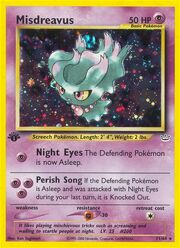 Misdreavus has appeared a scant few times in the Pokémon Trading Card Game, due to it being a mere Basic Psychic-type in all cases: