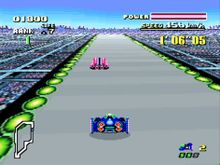 The entire flat ground is courtesy of Mode 7. The vehicles are sprites that appear to be racing on it. From F-Zero on the SNES.

Mode 7 technology was a feature on the SNES that developers didn't utilize very much until F-Zero and Super Mario Kart. It is called Mode 7 because it is the 7th mode of displaying background layers.

What made Mode 7 unique was it's ability to scale and rotate that layer. With this, you could create a pseudo-3D look on the SNES. Before people thought of using it for tracks in racing games like Super Mario Kart or displaying overworlds like in Final Fantasy VI, it was used to make fancy-looking title screens. Games that utilized Mode 7 would not look as good on the competing Sega Genesis.