Moltres is a Pokémon that first appeared in Pokémon Red and Blue. Its name comes from molten and Spanish tres, meaning "three", indicating that it is number three of the Legendary Birds, after with Articuno and Zapdos. According to the Pokédex, Moltres is a legendary bird of fire. A "dazzling flash of flames" is created whenever it flaps its wings, bright enough to light up the night sky red. Moltres' warmth can bring cold areas an early spring as it flies south during the winter. If injured, Moltres will dive into the molten lava of a volcano to heal itself.

Moltres is a large bird that is literally ablaze with fire. It has an orange body, a small pointed beak, and where its plumage should be are flames of a searing intensity.

Moltres can be seen as the avian embodiment of an inferno (compare with Ho-Oh). It can freely create and manipulate fire, and it constantly sheds flaming embers from its wings. Indeed, its wings are laden with enough fiery material that with every flap, a dazzling flare of flames is created to illuminate the night sky and overwhelm any person who might be in the area to see it.

Moltres is an elusive creature, seen about as rarely as the other two members of the winged mirage triad to which it belongs: Articuno and Zapdos. When Moltres thinks it is in the least bit possible danger (an unlikely scenario given Moltres’ power), it will summon a flash of fire and seemingly disappear, flying out of sight very fast.

Incredibly, Moltres’ body seems unharmed by contact with molten lava; in fact it actually restores Moltres' health. When its body is injured for any reason, it will head towards a volcano and dip its body in the molten magma to heal its wounds.Oddly enough, it doesn't have the flash fire ability.

Moltres, as a Legendary Pokémon like the other two, Articuno and Zapdos is a mission-centered Pokémon because only one exists in certain versions of the Pokémon game and is encountered in a predetermined environment. In Pokémon Red and Blue, and Pokémon Yellow, Moltres is found in a side area in the Victory Road cave. In the Pokémon FireRed and LeafGreen remakes, however, Moltres has moved to a different location, which is on the top of Mt. Ember on the first Sevii island (it can be accessed before defeating the Elite Four). This move is quite notable, as in the first generation, players have to defeat all 8 gyms to have 8 badges, while in the third generation games, a player just has to beat Blaine in Cinnabar Island and he will give you a Fire Blast (TM38), and go with Bill to One Island to catch it. This may give the FireRed/LeafGreen player an upper hand, due to the fact that it could be caught earlier. In addition, a Shadow Moltres can be snagged from Cipher Grand Master Greevil in Pokémon XD: Gale of Darkness, in Citadark Isle. Moltres also appears as both a boss and a playable character in Pokémon Mystery Dungeon.

In Super Smash Bros Melee, Moltres can be released from a Poké Ball and will damage your enemies with Sky Attack. It then flies off. Moltres is also a trophy won from the lottery.

In Pokémon Snap, there is a large egg blocking the exit to the "Volcano" stage. If the player throws an apple or Pester Ball at the egg, it will melt in the lava and Moltres will emerge from it. It will then shake off its embers, allowing one to take a few quick photographs.

Moltres can be found in the Victory Road cave. You'll have to sort through the cave's boulder and button puzzles in order to get to the secluded, sealed-off area that Moltres resides in. It has a low catch rate and lots of HP, so you might want to bring plenty of Poké Balls.

The location of Moltres was changed for FR/LG. Instead of Victory Road, Moltres can be found only on One Island, at the top of Mt. Ember.

Moltres' location should be pretty obvious... you can't get through the volcano without knocking its egg off the track and into the lava with an item and making it hatch.

You can snag a Moltres in Pokémon XD: Gale of Darkness during the final battle with Greevil. When purified, it knows Will-o-Wisp, Morning Sun, and Extrasensory, all moves that Moltres cannot normally learn.

The stats of moltres are generally stronger than most Pokémon (as with all other legendary Pokémon). There is no exact calculation because all Pokémon have individual values assigned to each stat. These individual values can vary from 1 to 31 in each stat, meaning that you could catch a moltres that has 31 points less in each stat than a moltres your friend caught.

Poor Moltres suffers from the same problem Charizard and Ho-oh have: an extreme x4 weakness to Rock, and weaknesses to two very popular types (Water and Electric). While Moltres' stats and choice of moves are easily outshined by the unbelievably cheap Ho-oh, or even non-legendary Charizard, you shouldn't let that stop you from using it - Moltres has the Attack and Sp. Attack stats to fully take advantage of STAB for both its Flying-type and Fire-type, AND effectively pull off a Steel Wing to get rid of those dangerous Rock-types. With the right moveset it can easily be quite the sweeper.

An obvious choice as far as Fire moves go would be Flamethrower, or Fire Blast if you don't mind being a bit inaccurate. Moltres has the potential to do some serious damage with Fire Blast in particular (120 base power + 383 Sp. Attack + 25% more damage from STAB + possible Sunny Day = much pain).

Speaking of which, a good defensive move for Moltres would be Sunny Day. Not only does it halve the power of Water, and slash the accuracy of the already inaccurate Thunder, but it'll boost its own Fire-types and make Morning Sun heal you 100% if you're using a Moltres from Pokémon XD.

Finally, you might want to keep Sky Attack on Moltres for novelty, though bringing it into a serious battle basically gives your opponent a free switch. Not only is it basically THE "phoenix" attack, but only few other Pokémon besides Moltres learns it. With a base power of 140, and Moltres' high Attack, it's definitely an attack to be feared, coming from Moltres.

Prior to Pokémon: The Movie 2000, Moltres had only appeared in myth and imagery.

In the first episode of the series, Ash Ketchum sees a large, shining bird flying above the plain, later revealed to be a Ho-Oh. However, given the timing of the episode's debut, most people speculate that Ho-Oh was created by the series' staff and later incorporated into the second generation of games by Nintendo, or was intended to be one of the 3 winged mirages from the original games. Possible evidence supporting this theory includes the fact that, in the second episode, Ash saw a stone engraving of a legendary bird Pokémon and remarked that he had seen it, but Professor Oak said that he probably hadn't, saying that many people had searched their whole life for that Pokémon and never found it. Strangely, the image in question was not actually of Ho-Oh, but Moltres.

In Episode 17, “Island of the Giant Pokémon,” a giant Moltres chases Team Rocket through the night on an island seemingly filled with all sorts of giant-sized Pokémon. It is revealed later that, like all said Pokémon, Moltres was merely a semi-sentient animatronic.

In the episode "All Fired Up", where Ash and company have made it to the opening ceremony of the Pokémon League, a ball of fire comprised of the essence of Moltres is featured as the symbol of competition, much like the ceremonial torch seen in the Olympics. Ash is to relay the "Flame of Moltres" to the Indigo League Torch in this manner in order to signify the commencement of the games. However, Team Rocket had their eyes on the valuable flame, and soon seized it and attempted to use it to harm Ash. However, the flame had a mind of its own (possibly possessed by Moltres' spirit), and it backfired against Team Rocket, sending them to blast off once again in order to save Ash, Pikachu and Bulbasaur.

The first official appearance of Moltres was in "Pokémon The Movie 2000: The Power of One", along with the other two winged mirages (Zapdos and Articuno). It was one of the two birds that the villainous collector, often referred to as both Gelardan and Lawrence III, captured to allow him access to Lugia's power, but the upset of the balance that occurred as a result nearly caused a worldwide weather catastrophe as Moltres was driven to wage war with its two rivals. They were quelled once Ash and Lugia fulfilled the prophecy related to the legendary birds.

Another episode that doesn't feature Moltres, but is worthy of note in conjunction with the character, is "The Fortune Hunters", the final episode of the Johto Journeys season. In it, James of Team Rocket reads his fortune in a Pokémon fortune telling book, a personality test based on each person's birthdate. He is delighted to discover he is a "Moltres type". The book elaborates, "No matter what difficulties befall them, the Moltres type will always prevail and, just like a real Moltres, the Moltres type personality soars high above all others and triumphs". James nicknamed himself "James the Mighty Moltres" for the remainder of the episode(even donning a Moltres costume at one point) and his determination and confidence increased greatly, making him much more resourceful and helpful to the team. Sadly for James, the book was a fake created by fellow Team Rocket members Butch and Cassidy. Learning this destroyed James' confidence and he instantly went back to being a loser. (As a side note, James discovers his real personality type at the end of the episode from the real fortune telling book, and screams, aghast, "Oh, no! It can't be!", though it is never revealed exactly which Pokémon he is associated with.)

The first fully corporeal Moltres seen on the show itself is seen in the Pokémon Chronicles episode "The Search for a Legend", where Richie and Silver try to climb Mt. Ember to find Moltres, but Butch and Cassidy are tagging to try to capture the winged mirage but was beaten by it, Silver decided to let it go.

In Chapter 26 of the Pokémon Special manga, Team Rocket summons out Moltres, the bird of fire to destroy Red and his teammate.

In Chapter 178, Moltres turned out to be male legendary-like Pokémon, he was controlled by Green so that he was under her commands to help out Red with Articuno and Blue with Zapdos.

In the Pokémon Special manga, Sabrina is shown to have obtained Moltres during the Kanto saga, but it is not seen in battle. It is later combined with Articuno and Zapdos to form a singular legendary bird, but they separate once Sabrina is defeated.

Blue later catches Moltres during her training journey to overcome her fear of birds. 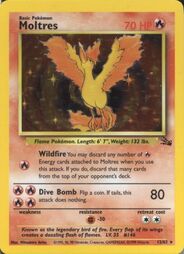 Moltres in the Trading Card Game.

Moltres, in all cases a Basic Fire-type Pokémon, has had plenty of cards under its name:

In addition, Moltres appeared as the 24th promotional card. It was one of three winged mirage cards handed out at random at theatrical showings of Pokémon: The movie 2000 (during the second week in theatres).