Monopoly is the name of a popular board game by Parker Brothers, who was later bought out by Hasbro. It is the #1 board game in the world. The object of the game is to purchase as much property on the board as possible until the other players have gone bankrupt. This is accomplished through dice rolling, piece moving, and card drawing.

The original game was invented in 1904 by Lizzie Maggie, under the title, "The Landlord's Game". It was intended to easily convey the criticism of the land owning elite. Eventually, the game became popular through word of mouth, and Charles Darrow created his own, more developed version called Monopoly. He also bought the rights to The Landlord's Game, and brought it to Parker Brothers.

How to Play[edit | edit source]

Players are distributed a set amount of money. They pick a board piece to represent themselves, from a shoe to a thimble, and roll a 6-sided dice to determine how many spaces they move (Starting from the "Go" space). If they land on property that has not been bought, they may choose to buy it themselves. If they land on property that has been bought, they must pay a rental fee (which depends on the space) to the owner. There are other spaces, such as the "Chance" spaces, which makes a player draw a Chance card.

Whatever the card says, the player must comply with. The player could gain money, lost money, or be locked in the "Jail" space for a limited number of turns. When a player makes one whole lap around the board, by passing the "Go" space, they receive a M200 bonus

Being the most popular board game of all time, Hasbro has taken many opportunities to create licensed tie-ins that play exactly like Monopoly, but with different pieces, names, boards and spaces. 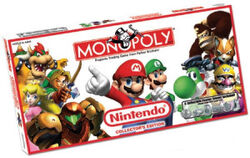 There have video game ports/versions of the board game on the following platforms: