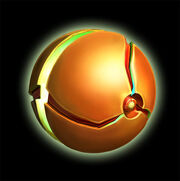 The Morph Ball has appeared in many Metroid games. The upgrade allows Samus Aran to transform into a small ball. In the first Metroid game Samus uses the item Maru Mari to turn into the Morph Ball, but in more recent games both the item and the ball had been called Morph Ball. The size of the ball varies from game to game. The Morph Ball has the following upgrades (though, not all of them are in every game):

Allows Samus to drop bombs. She can drop as many bombs as she wants, but no more than three can be on screen at a time. In the 3D Metroid games, the bombs have been concentrated bits of energy, but in the 2D games, the bombs appear to be solid. This inconsistency is understandable, as Samus needs to be able to pass through the bombs in the 3D game (because unlike the 2D game, it can't just be assumed that they are behind her) and on most 2D systems, rendering transparent points of energy would take up too many system resources. Rolling into a ball and blowing the bomb is a good way to get Metroids off of Samus.

With the help of Morph Ball Bombs, Samus can also perform a move called the Bomb Jump. When a Bomb explosion hits Samus in Morph Ball form, she gets launched into the air. If Samus places her Bombs in midair after Bomb Jumping, she can go even higher. The Prime series limits the number of bombs available to no more than three at a time, preventing the infinite bomb jumping exploits of the 2D games.

A more powerful version of the Morph Ball Bomb. Samus has a limited amount of these and must replenish them when she runs out. They explode in big oval explosions that tend to cause much more damage to enemies then a regular Morph Ball Bomb would, and are often the only thing that can break through certain obstacles.

This allows the ball to shoot off with great speed. It's used for half-pipe puzzles and to activate the spinner generators in the Metroid Prime games.

This upgrade was introduced in Metroid II: Return of Samus and used in Super Metroid, Metroid: Zero Mission, and Metroid Fusion. It allowed Samus to jump in Morph Ball mode, thus eliminating the frustrating Morph Ball Bomb jumping method. In Prime 3 this can be done just by flicking the Wii Remote up.

There are many objects that require the Morph Ball to be used. Some in gimmicky check point ways, and others in more practical ways.

Use the Morph Ball Bomb to flip switches.

Use the Boost Ball to flip switches. Sometimes its used to turn a gear that results in turning a much larger mechanism like a turret gun.

Requires the boost ball to shoot up and down the sides of a half-pipe in order to reach the top.

In 3D Metroid games these are required to climb walls with the Spider Ball.

You are often made to perform these moves in most Metroid games after getting the Morph Ball.

In almost every Metroid game Samus must use the Morph Ball Bomb to 'jump' by letting it explode and pushing the ball up in the air. It's pretty simple, really, just set a bomb and let it blow up while the ball is next to it. This will shoot it up in the air and allowing Samus to push forward and reach new areas.

In most Metroid games, the player can precisely place a second bomb at the height of their first bomb jump, and a third when they land to cause a chain of explosions propelling Samus higher than a single bomb jump. (In Prime 3, an easier way to do this is to flick the Wii Remote up for the first and third jump.)  Frequently, there are areas that are only accessible through chaining together precisely timed bomb jumps. These areas usually contain superfluous upgrades of missiles, energy tanks, etc., and rarely are required to complete the game.  This can also sometimes be used for sequence breaking.

In Super Metroid and some of the later 2D Metroids, it is possible to run at full speed, jump into the air, and then turn into the Morph Ball exactly when you land to reach very high speeds that are otherwise impossible.  This is another way to sequence break.  The Speed Booster also brings the ability to Shinespark in ball form.