Mount&Blade is an action RPG set in the middle of a fictional war between two kingdoms. The game is open ended, so the player can do whatever he wants, but the game is most centered around combat. You can compete in tournaments, hire mercenaries to help you fight bandits, or even capture prisoners and sell them as galley slaves.

There isn't much of a goal in Mount&Blade. You are placed in the region of Calradia in the middle of a war between the Swadians and the Vaegirs. You can join either nation and fight your enemies for gain, or you can stay independent, trading between the several cities scattered about the world map.

When you start the game, you can edit how your face looks, and your starting attributes. Attributes consist of the standard RPG elements, and at level up you can buy skills, all of which have practice effects like raising your health or allowing you to track units on the world map. 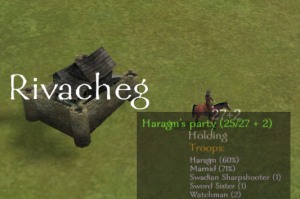 A town and party on the world map

Outside of battles and towns you move from place to place as a piece of a map. The game is real time, but time stops when you stop, so you can stay in one place for however long you wish and think about what your going to do next. Different groups of people, both friendly and hostile, will spawn in different points around the map. To get into a fight you simply move into an enemy. Battles will get larger and harder as you level up, and you might want to bring some help with you.

Battle in Mount&Blade can be either first or third person. The effects of stats are well defined but subtle, and battles are generally decided by skill. Your fellow soldiers will largely act on their own, but you can give them simple commands like 'attack' or 'stay here'. The goal of the battles are to kill or incapacitate all of your enemies.

There are a wide variety of weapons and armor in the game. All weapon types are effective in certain situations. A lance, for instance, is extremely powerful while charging with cavalry, but does almost no damage on foot. There is also a lot of armor, but the effect of armor is much less widespread. Plate armors are better than padded leather armors in every respect.

Mount&Blade is an Indie game developed by TaleWorlds, which originally consisted of a single couple in Turkey. Mount&Blade is still in beta stage, but they offer the game now as shareware. You will have to buy the game or start a new character after level 6.