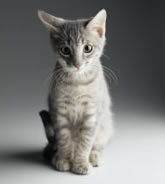 A kitten will look for a mouse, but has nothing to do with Mouselook.

Mouselook (also known as free look) refers to the way of controlling the view on PC games, usually in FPS games. Mouselook is when your mouse movements control the direction of the view, which is important for aiming a gun in an FPS or moving around in conjunction with WASD.

Mouselook + WASD is considered by many gamers to be the ideal control set up for FPS games. Since console FPS games have no mouse, they rely on the dual stick control set up, which is not as easy to aim as Mouselook. Although common today, it was a large breakthrough when it became popular. Back then, games such as Doom or Marathon did not allow players much freedom in aiming or looking around.

Star Cruiser (1988), particularly the Sharp X68000 version, used a control scheme with the direction keys used to move and strafe, while the numpad keys are used to turn around and aim (much like the function of the mouse in later FPS games). However, it is not possible to aim up or down while on foot (much like Doom), but in the outer space segments, the player can aim in all directions with the numpad keys.

Taito's 1992 first-person shooter arcade game Gun Buster featured a unique control scheme where the player moves using an eight-direction joystick and takes aim using a mounted positional light gun. The player could turn left or right by moving the gun pointer to the left or right edges of the screen.[1][2] However, the game lacked the ability to look up or down.

Other first-person computer games with free look had appeared as early as 1992 on the PC, although vision was controlled by dedicated keys rather than the mouse. At the time it was still cutting-edge technology and didn't become widespread until the age of 3D accelerators. For instance, in the 1993 seminal game Doom, it was not possible for the player to angle his or her view up or down, though Raven Software's Heretic, based off the same engine as Doom and released in 1994, added a restricted free look to the engine. Dark Forces released in 1995 and more technologically advanced, featured 3D look but more restricted than the free look of the earlier Ultima Underworld and System Shock, released in 1992 and early 1994 respectively.

Raven Software's November 1994 release CyClones featured a rather primitive implementation of the free look; main movement was via keyboard (with turning and strafing via key combinations), but the on-screen weapon aim point was moved independently via the mouse. Moving the aim point against the edge of the screen would cause the viewpoint to shift up (only temporarily) or to the side (again, haltingly). Unfortunately, this system proved cumbersome and Raven Software did not develop this particular system further. The 1993 DOS version of Bram Stoker's Dracula also used the mouse to aim the player's weapon cross-hair, similar to CyClones, but the player's viewpoint was controlled entirely by the keyboard and did not move with the cross-hair.

The next major step was using the mouse to control the free look. Marathon by Bungie, released in December 1994 for the Apple Macintosh was the first major release to feature the mouse-controlled free look that would later become universal. The first major game for Intel-based PCs to use full-time fully 3D mouselook was Terminator: Future Shock (published by Bethesda Softworks in 1995).[3] However, Terminator: Future Shock did not become very popular and the original Marathon was not available on the PC platform, so their impact was limited. Quake (1996), is widely considered to have been the turning point in making free look the standard, in part due to its Internet multiplayer feature, which allowed large numbers of mouse and keyboard players to face each other head-to-head, and proved the superiority of mouselook over keyboard only controls. Although games using older engines continued to appear for a few years, the 3D accelerator boom in the mid-90's meant that for the first time true 3D engines could be run on home PCs, and free mouse look would rapidly become essential and standard in almost every 3D game.

The next major step was the seminal GoldenEye 007 (1997), which introduced the feature to consoles by incorporating the manual aiming of Sega's light gun shooter Virtua Cop (1994) in its first-person shooter gameplay. According to creator Martin Hollis: "We ended up with innovative gameplay, in part because we had Virtua Cop features in a FPS: A gun that only holds 7 bullets and a reload button, lots of position dependant hit animations, innocents you shouldn’t kill, and an aiming mode. When you press R in GoldenEye, the game basically switches to a Virtua Cop mode."[4] GoldenEye 007 introduced dual analog stick controls (using two Nintendo 64 Controllers) as an option, setting the template for the dual analog stick control scheme that would be used in subsequent console FPS games.