When Pokémon first appeared, it was believed that Mr. Mime was an exclusively male species because of the "Mr." honorific being part of its name (and being a counterpart to Jynx).

However, later games Pokémon Gold and Silver introduced genders to the series. In Japan, Mr. Mime's Japanese name, Barrierd, gave no bearing to its gender, so the developers naturally made half of the species female. This was a problem for the English translation, however. The developers eventually decided to keep the name 'Mr. Mime', despite the fact that half of them are now female[citation needed]. In the Pokémon Gold/Silver/Crystal generation of games, the Gym Leader Sabrina in Saffron City, Kanto uses a female Mr. Mime, one of the most noticeable examples of this mix-up. Her Mr. Mime is female in Pokémon FireRed and LeafGreen as well.

Mr. Mime was conceived and developed by Ken Sugimori for the first generation of Pocket Monsters games Red and Green, known outside of Japan as Pokémon Red and Blue.[1] Its name originates from its appearance and hobby, that of a mime.[2] Appearing as an anthropomorphic creature, it has a pink head with red cheeks and blue, frizzy hair, a round, white body with a red spot in the middle, light-pink arms and legs are connected to its body by red spheres, white, five-fingered hands, and black feet that curl upward at the tips. Despite being depicted with four fingers and an opposable thumb, in-game graphics featured only three fingers and thumb for the character until the release of Pokémon Ruby and Sapphire.

Mr. Mime are gifted with the art of miming at a young age, but as they mature, they gain the ability to make invisible objects.[3] Their fingers emit energy that hardens air to form a wall.[4] Others say it shapes an invisible wall in midair by minutely vibrating its fingertips to stop molecules in the air.[5] These barriers can repel harsh attacks.[6] Its gestures and motions convince watchers that something unseeable actually exists. Once it is believed, it will exist as if it were a real thing.[7] Mr. Mime are very prideful of their pantomime acts, and it will heavily slap anyone that interrupts it while miming.[8]

Mime is a Psychic-type Pokémon. Its Ability is "Soundproof", which nullifies sound based attacks such as Uproar, Screech and Supersonic. Its other ability, Filter, cuts damage received in half if the attack is super effective against Mr. Mime. This theoretically makes it impossible to score a super effective hit on Mr. Mime, as it only has one type and therefore cannot take quadruple-effective attacks. Mr. Mime has good Special Attack, Special Defense and Speed, but compared with other Pokémon, it is weak in Attack and Defense.

In the video game series Mr. Mime can be acquired from an in-game trade in Pokémon Red and Blue, and Pokémon FireRed and LeafGreen.[9] In Pokémon Gold and Silver, Mr. Mime can be found in the wild on Route 21, the route south of Pallet Town. It also appears in the wild in Pokémon Diamond as a version exclusive Pokémon. In Pokémon Diamond and Pearl, Mr. Mime gains a new pre-evolved form, Mime Jr., which evolves when leveled up while knowing the move Mimic.[10]

Gym Leader Sabrina uses a female Mr. Mime in every game she appears in except Pokémon Yellow, because of it being based on the anime, in which she does not have a Mr. Mime. In Pokémon Diamond and Pearl, Elite Four Lucian also owns a Mr. Mime.[11] In Pokémon Stadium 2, Mr. Mime stars in its own minigame called "Barrier Ball." Poké Balls appear on the field and by using Mr. Mime's Barrier, send the Poké Balls to the other player's fields.[12] Mr. Mime can be found outside the players house in Pokémon Channel under certain time and weather conditions.

In the anime, a Mr. Mime lives with Delia Ketchum. He does housework for her, apparently in exchange for room and board. Ash dressed as a Mr. Mime to inspire a real Mr. Mime who worked for a circus. Delia knew about this, so when a wild Mr. Mime came to her door and wanted lunch, she thought it was Ash in costume, and provided it with food. When the real Ash showed up, still in costume, she was quite puzzled, but wound up keeping Mimey as her live-in maid. It will only listen to Delia, and if anyone else, even Ash, gives it orders, or asks it to do something, it will normally ignore them. It is unknown if Delia has actually captured Mimey, as she is never shown with its Poké Ball. When Ash and his friends returned to Pallet Town following the Orange Islands saga, it was revealed that Brock and Mimey had become rather competitive regarding household tasks while the two of them were sharing the house with Delia.

In the Pokémon Adventures manga, Mr. Mime was first seen under the control of Sabrina, generating a Light Screen to seal off the whole of Saffron City. The same Mr. Mime was seen again during the Gym Leader faceoff, using its miming powers to trap Bugsy and defeat his Heracross. Mr. Mime has also appeared under the ownership of Crystal and has the ability to create invisible walls and rooms, much like Sabrina's Mr. Mime. It creates a training room for Ruby and Sapphire and Emerald to teach their Pokémon the ultimate moves Blast Burn, Hydro Cannon, and Frenzy Plant. 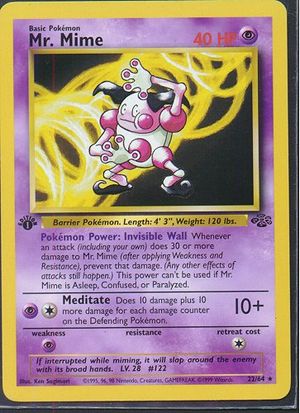 Mr. Mime has made six appearances in the card game, all as basic Psychic-types:

Mr. Mime’s Jungle version was a very popular card due to its near-invulnerability to attacks by powerful Pokémon. Its Pokémon Power prevents any damage that totals 30 or above, making it an extreme annoyance to opponents and a staple in many stall decks. Mr. Mime is perhaps the most claused card of any of the Pokemon cards.

1UP.com named Mr. Mime the "Lamest Pokémon" in the franchise, stating "Mr. Mime makes you shake your head and question what reality we actually inhabit. Surely proto-human-clown-mime Pokémon don't arise in any ordinary universe."[13] In an analysis of the article on 1UP FM, the hosts agreed with the statement, describing him as hideous and "kinda a Krusty the Clown...malformed...thing".[14] Retronauts stated similar, calling it out specifically as a "creepy son of a bitch", and a Pokémon that should not be part of the series due to its blatantly human appearance, further describing it as "everything that's wrong with mimes and clowns".[15] GamesRadar named it one of the most "fugly Pokémon" in the series, describing it as "just...creepy", citing specifically its humanoid shape and dangling arms.[16] However, they also noted that while one of the more weirder characters in the series, it was also one of the more popular.[17]

Other sources have instead praised the character's appearance. The book Gaming Cultures and Place in Asia-Pacific defended Mr. Mime's design. Suggesting Sugimori developed it along with Jynx to draw upon the humor of heta-uma (a term meaning bad/nice), the book notes the design oscillates between the poles of good and bad, and as a result offers diversity within the game and invites scrutiny from players.[18] The Coventry Evening Telegraph also praised its design, stating the character was "more interesting" in comparison to more commonly seen Pokémon such as Squirtle.[19]