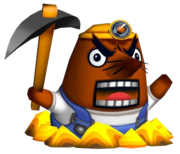 Mr. Resetti is a mole and one of the major characters in Nintendo's Animal Crossing series.

Because Animal Crossing operates in a persistent world that remains active even while the console is off, it is considered unethical to manipulate events to one's favor by resetting the console without saving. When one does this, Mr. Resetti will appear, launching into an extremely long, insufferable spiel about the ethics and ramifications of committing such an act. After he is finished, the game resumes as normal, but because of the nature of his tirades, players tend to refrain from resetting the console when possible in order to avoid Mr. Resetti's wrath.

It is assumed that the main aim of this character is to stop Players from ending the game without saving, because eventually he asks you to do near impossible tasks, like repeating something to him about how stupid you are. Also he gets mad at you for something you can't control, as he asks you for money and the game doesn't give you the option for this.