"Muk" is a derivation of the word "muck", meaning dirt or slime, as per its body structure and appearance. Its Japanese name is a play on べとべと betobeto, the word for "sticky".

Muk is a living manifestation of sludge and waste. Muk thrives in toxic waste and garbage. It inhabits any polluted area; including abandoned factories, garbage dumps and sewers. It is said that its smell is comparable to that of reeking kitchen garbage, especially during hot summers.

Muk itself is also a source of pollution. As Muk slides across the ground, it leaves behind a trail of highly poisonous sludge. Muk and Grimer are known for traveling into water and polluting it and killing plants with their sludge. Muk could be considered antagonistic of Suicune, a Pokémon with the ability to purify dirty or polluted water. It can also be considered antagonistic of Celebi, which can bring dead plants back to life.

Muk's thick, sticky sludge can be used to trap foes in battle. Muk can Body Slam the foe, entangling them in its sludgy belly. It can appear suddenly, ensuing panic. It's characteristic resembles like a slime or a blob.

In Pokémon Red and Blue and Fire Red and Leaf Green, Muk is available for capture in Cinnabar Island's Pokémon Mansion. In Ruby and Sapphire Muk can be obtained by having a Grimer reach level 38.

In addition to the Pokémon-repelling Stench ability, Muk can possess the Sticky Hold ability, which keeps foes from stealing Muk's held-item with attacks like Trick or Thief. .

To find Muk in Pokémon Snap, the player has to throw pester balls at a Grimer until it evolves.

Ash and friends encounter a horde of Grimer in an abandoned power plant. As Pikachu is suffering from a nasty electrical cold, Pikachu's electrical attacks are useless against the Grimer. When a Muk appears, all seems hopeless until a group of friendly Magnemites and Magnetons arrive to help. They all shock the Grimer into submission. Ash seizes the opportunity to capture the Muk leader.

When Ash first caught Muk, its smell was able to escape the PokeBall, much to everyone's displeasure. For this reason, Muk was given to Professor Oak. Strangely, however, in all of Ash's future use of Muk, the smell does not bother anyone.

A running gag in the series involves Muk and his overly affectionate personality. He constantly expressing gratitude towards Professor Oak by hugging him, and in the process smothering him with its gooey body, he also started to do this with Professor Birch (however, it is this same technique that helps Ash later beat an Indigo League trainer with an almost undefeatable Bellsprout.) Also smothers Ash and friends after returning to Pallet Town and after battle victories where Muk is used.

Muk is one of the Pokémon owned by Koga in Pokémon Special, used in his attack on Articuno. Muk is seen again during the Elite Four saga, used by Koga to shield himself from the debris of the collapsing Cerise Island. 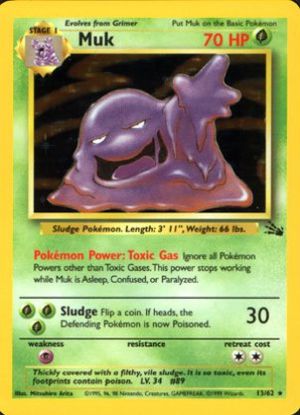 Muk's first appearance in the Fossil set featured a useful Pokémon Power that caused the Pokémon Powers of all other Pokémon in play to stop working.