Murkrow (ヤミカラス, Yamikarasu in original Japanese language versions) are one of the 493 fictional species of Pokémon creatures from the multi-billion-dollar Pokémon media franchise—a collection of video games, anime, manga, books, trading cards, and other media created by Satoshi Tajiri.

Murkrow's appearance takes after the real crow or raven. It is a small black bird with red eyes. The top of its head is styled as a witch's hat and its tail bristles out like a broomstick.

Murkrow is rather unpopular in the Pokémon world. Its dismal appearance and nocturnal nature have long caused it to be considered an omen of ill fortune to all who see it.

Murkrow has not earned this bad reputation causelessly, however; its habits and demeanor are also rather sinister. It is said that if a Murkrow finds itself hunted, it fights back by leading its pursuer to dark mountain trails in an attempt to get him hopelessly lost in the darkness.

Murkrow is also attracted to bright, shiny objects, which it collects to stash in its nest. It does not hesitate to steal such objects if necessary and has even been known to attempt to snatch rings off their owner's fingers. This penchant for hoarding sparkling items is shared by Meowth, and the two species habitually loot each other's findings.

With the addition of Pokémon Diamond and Pearl, it is revealed that some Murkrow are servants to its evolved form, Honchkrow. Honchkrow itself and the fact it has Murkrow servants is reminiscent to that of a Mafia Don.

Also with Diamond and Pearl's release, Murkrow, like many other Pokémon, have gender differences. In this case, Males have a taller "hat" than females would.

Murkrow's interest in collecting treasures and its thieving traits are also shared by a real world bird, the bowerbird or magpie.

In Pokémon Gold, Silver and Crystal, Murkrow is commonly found in Routes 7 and 16 during the night. In Pokémon Colosseum, it is a Shadow Pokémon that can be Snagged in the Shadow Research Institute. In Pokémon FireRed, Murkrow is located in the Lost Cave. In Pokémon Diamond, Murkrow can be found in Eterna Forest at night.

Murkrow has high Speed and equally high Attack and Special Attack, but both its Defense and Special Defense are extremely low, making it an underused Pokémon. Its Dark/Flying type combination neutralizes the Dark type's weakness against Bug and Fighting-type attacks, but gives Murkrow the far more common Electric, Ice and Rock type weakness. Murkrow naturally learns some uncommon disrupting moves, such as Haze, Taunt and Mean Look, and it can also acquire Confuse Ray and Drill Peck through breeding. Some sort of defensive or disrupting move is often used to protect the fragile Murkrow so that it can attack in relative safety.

In Pokémon Gold and Pokémon Silver, a Murkrow is cornered in Team Rocket's hideout and tells the player the secret passwords needed to bypass doors. How this Murkrow can talk is not revealed. It is most probably trained to talk as many domestic parrots, budgies and other speech capable birds are in the real world.

Oddly enough, Murkrow has the potential to learn Rest, Sleep Talk and Snore, all moves that require it to sleep or to be asleep, which is impossible as long as it has its Insomnia ability. Contrary to popular belief, Insomnia does not allow Murkrow to use Rest without having to sleep for two turns; instead, the move fails. However, in Pokémon Diamond and Pearl, Murkrow has another ability, Super Luck, thus allowing Murkrow to enable these moves.

In Pokémon Diamond and Pearl, Murkrow can evolve into Honchkrow by using a Dusk Stone. Murkrow can only be obtained in Pokémon Diamond. The evolution has much higher HP and Attack, a smaller increase in Special Attack, slightly higher defensive stats, and lower Speed, and its appearance is similar to that of a Mafia Crime boss, rather than a witch.

Murkrow first appeared in the third movie short special, where it caused trouble for the Pichu Brothers. It was also featured in episode #186, "All That Glitters", where it demonstrated its thieving personality by stealing Ash's badges. In episode #243, "Hocus Pokémon", one acted as a familiar spirit to Lily, a "Pokémon Witch" and helped her collect the ingredients for her spells. Murkrow has made a number of additional appearances, but they are all cameos. In the new opening of Pokémon: Diamond and Pearl, Paul is seen with a Murkrow.

Murkrow appears in the Pokémon Adventures manga series as one of the Pokémon belonging to the character Silver. He is somehow able to cling to its foot as it flies around, using it as a method of transportation.

In Pokémon Special Gold, Silver and Crys all have Murkrow. However, Silver is the only one who actually has it on his team. Gold caught one at the start of Volume 8 while Crys caught hers as one of the many Pokémon she captured for Professor Oak's research. Karen is later seen with two Murkrow. Like Silver, she uses them for flight transport. 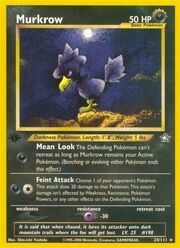 Murkrow has appeared a few times as basic Dark-type Pokémon in the trading card game: