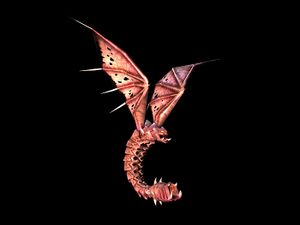 A Mutalisk is a fictional airborne Zerg breed in the science-fiction real-time strategy computer game StarCraft made by Blizzard Entertainment.

Mutalisks have a long body and tend to fly with their tails curved forward in an elongated L-shape. Their wings sprout from their back. A group of mutalisks is often referred to as a 'scream' of mutalisks.

Mutalisks move through air or vacuum quite quickly and possess a unique "Glaive Wurm" (also spelled Glave Wurm) attack: these symbiotes, fired from the tail, will bounce off an initial target and strike two more explosively before disappearing, each time doing successively less damage. Before upgrades, they inflict 9, 3, and 1 damage, respectively.

Mutalisks are a modified form of the Mantis Screamer from the desolate Dinares Sector. It was capable of space travel even before it was absorbed into the Zerg Swarm. The Mantis Screamer Hive structure was incorporated into the Swarm and is christened as the Spire, and as with all non-Hatchery structures, it is incapable of actually producing Mutalisks.

The original version of the Mutalisk used an acid attack rather than a Glaive Wurm. This creature can be seen in the ending video of StarCraft Episode III.

In gameplay terms, Mutalisks cost 100 minerals and 100 Vespene gas to create, as well as two Control. The player must also control a Spire to hatch Mutalisks.

If the Spire is upgraded to a Greater Spire, the Mutalisk can morph into a Guardian, a dedicated long-range bomber; which is descended from the nesting form of the original Mantis Screamer.

In StarCraft: Brood War, the Mutalisk can turn into a Devourer, which excels at countering enemy air units. The Devourer was specifically bred by the Zerg.

A Devourer is a powerful counter-air unit added to the Zerg race by the expansion pack of StarCraft: Brood War to the game of StarCraft. Devourers are large, slower flying units than Mutalisks. They spew vile acid at any enemy airborne ships or creatures, causing damage to the enemy unit being attacked, while splashing acid spores to that specific unit and enemy units immediately adjacent to the unit being attacked. The acid spores attach to the enemy units, slowing down their attack speed, reducing the effects of an enemy's armor by the number of acid spores, and revealing invisible units to the enemy. Acid Spores can be stacked up to 9 times, each added spore increasing the delay for each attack. Acid Spores will eventually disappear over time.