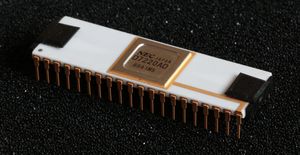 The High-Performance Graphics Display Controller 7220 (commonly µPD7220, NEC 7220 or GDC) is a 1982 graphics processing unit,[1][2] a video interface controller capable of drawing lines, circles, arcs, and character graphics to a bit-mapped display. It was developed by NEC, and used in NEC's PC-98 and APC computers, the optional graphics module for the DEC Rainbow, the Tulip System-1, and the Epson QX-10,[3] as well as various graphics cards for other personal computers.

The 7220 was the first true GPU (graphics processing unit),[1] designed as a microprocessor,[4] with VLSI,[5] implementing a graphics display controller as a single Large Scale Integration (LSI) integrated circuit chip. This enabled the design of low-cost, high-performance video graphics cards, such as those from Number Nine Visual Technology, and was the basis for clones such as the Intel 82720.[6] The 7220 and its clones led the early GPU market for several years,[6] and was still the best known GPU in 1986.[2] It was eventually surpassed by the more powerful Hitachi HD63484 ACRTC, released in 1984.[7][8]

By 1983, it was used in early PC-98 and APC computers from NEC itself, and other computers from Digital Equipment Corporation and Wang Laboratories.[10] A year after introduction, one journalist said "The 7220 GDC chip is a component that even some of NEC's competitors have found too good to pass up."[10] The 7220 had a fillrate of 1.25 megapixels per second and a rasterisation rate of 125 polygons (100-pixel by 100-pixel) per second, faster than central processing units (CPU) at the time.[2] The 7220's high resolution color graphics led NEC to market it as a "resolution revolution".[10]