Natu (ネイティ, Neiti, Naty in original Japanese language versions) is one of the 493 fictional species of Pokémon from the Pokémon Franchise – a series of video games, anime, manga, books, trading cards and other media created by Satoshi Tajiri.

The name Natu could be a play on the word "native". Its may also be a reference to Atu, an Aztec god. Atu is also the name of the first man of Samoan mythology, and is the Latin word for "by birth". Its Japanese name is perhaps a corruption of the word neichi (佞智), meaning "craftiness", or the word "native".

Natu are very small, spherical, green birds with underdeveloped, textured wings, red talons, red tail feathers, and a red plume on each of their foreheads. Natu are currently one of the second smallest Pokémon yet discovered (the other being Diglett). Since their wings are not fully grown, Natu are unable to fly and therefore must hop around in order to get around. As a result of this, however, Natu’s jumping abilities are quite developed and they can hop great distances.

Natu are diurnal herbivores that live in savanna areas. They forage for food on the ground by custom, but when a lack of food on the ground is apparent, Natu turn to the trees that grow in the savannas. With their strong jumping ability in their talons, Natu may either charge forward and quite literally run up the trunk of a small tree to reach a branch or use both their legs and their flapping wings to propel themselves onto higher tree branches well over 7 feet off the ground. Once there, they peck at and feed on the tree’s recently grown shoots.

Natu have a peculiar nature in observing. Whenever they are seen, they always appear to be looking at something intently in particular. When a human makes eye contact with a Natu, the Pokémon will unfailingly stare back intently at him or her without hopping to safety, even though humans in comparison should be intimidatingly large. However, if that human moves even slightly, the Natu will suddenly hop away to safety.

Natu evolves into Xatu at level 25, and training Natu for evolution is comparatively easy to training other basic Pokémon because Natu has somewhat high Speed and Special Attack stats (not to mention, most are encountered close to level 25 anyway). Natu can learn a wide variety of moves from leveling up, breeding, and technical machines, and when purified in Pokémon XD, Natu gains the previously unattainable move Baton Pass, all of which can be passed on to Xatu.

Natu's most notable appearance was in the episode Doin' What Comes Natu-rally!, where it belongs to a shy boy called McKenzie. After being with Ash and teaching his Natu (whom he nicknamed "Naughty") Foresight, he loses his shyness.

Another Natu appeared in a parody of Titanic set in space.

Crystal owns a Natu, whose Psychic attacks allow it to hold its own despite its size. Crystal also uses Natu to provide flight transport over short distances.

In Volume 22, Will is seen to have a Natu during Silver's flashback of his escape from the Mask of Ice. 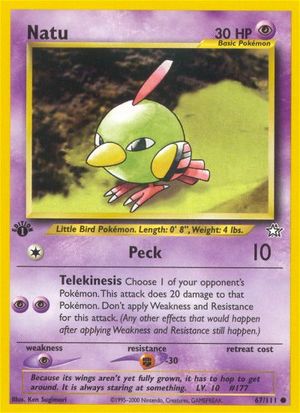 In the Pokémon Trading Card Game, Natu is featured on six different cards, all of them Basic Psychic-type cards, and they are found in the expansion sets Neo Genesis, Neo Discovery, Skyridge, EX Sandstorm, EX Deoxys, and EX Unseen Forces.