Neocron is a 2002 Post-apocalyptic MMORPG by the German developer Reakktor Media GmbH, for the PC. Neocron is the first game in the Neocron series, being followed by Neocron 2: Beyond Dome of York in 2004.

In the mid-22nd century, tensions rose between an expanded Chinese Empire and a joint European/North American Federation of the Free World. The unexplained apparent destruction of the first Chinese interstellar colony ship results in China launching devastating nuclear strikes with stealth missiles. In retaliation, the President gives the command to counter strike with cold fusion long-range missiles. World War III starts on February 17, 2143; it lasts less than 6 hours.

It takes over three centuries for even the most rudimentary civilization to return. By the mid-26th century two great cities had risen from the ashes, thanks in large part to the "Ceres Project”. Originally an MIT project in the early 21st century aimed at storing every aspect of human knowledge on holodisk, it was eventually taken over by the military in response to the murder of the project leader. 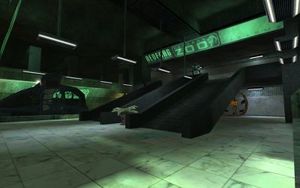 200 years later, both cities are but shadows of their former selves: Neocron is diminished thanks to a succession of coups d'état as well as a mass exodus to Irata III, a colony 80 light years away formed by the missing Chinese colony ship, and Dome of York suffers from losing a devastating war with Neocron. 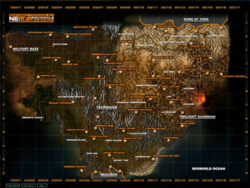 fr:Neocron 2: Beyond Dome of York