Neverwinter Nights is a third person role playing game created by BioWare and published by Atari. The game is based on the popular tabletop game Dungeons and Dragons. The game is set in the fantasy setting of Forgotten Realms. The game was released on June 18, 2002 for the PC. The game's success spawned the two expansion packs Neverwinter Nights: Shadows of Undrentide and Neverwinter Nights: Hordes of the Underdark. Bioware also released premium modules, which were much shorter than the expansion packs but offered a few new quests and were reasonably priced. The game came with the Aurora toolset, which gave users access to create their own modules, monsters, classes, etc. 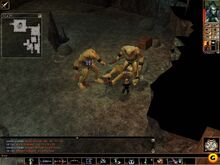 The game is played from a third person perspective. The character movement is controlled by the mouse or the arrow keys. To attack an enemy you simply click on it, although when casting spells you first have to select the spell and click on the person you want to cast the spell on. You have a very handy Quickslot section on your screen, it is at the very bottom, in this section you add the actions that you use the most as this can be a life saver. You are always shown 12 quickslots, but by pressing the SHIFT key you can access twelve more, and by pressing the CTRL key you can access an additional 12, for a total of 36 quickslots.