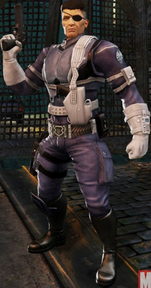 Nick Fury, real name Nicholas Joseph Fury, is a character from Marvel Comics. Nick Fury is the director of S.H.I.E.L.D.. He has extensive military and espionage experience dating back to the early 1940s, is an expert in several forms of hand-to-hand combat, and has weapons and demolitions training.

Nick Fury rescues Spider-Man and informs him that a meteor with a symbiote like that of Venom had broken up into five pieces in the Earth's atmosphere and landed in different locations across the globe. Someone found the meteor shards and uses them to create P.H.A.N.T.O.M.s to take over the world. The mastermind is revealed to be Mysterio, and after his defeat, Spider-Man gives the meteor shard to Nick Fury, who starts "Project Carnage" to study them and the symbiote. 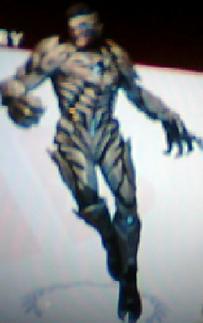 One year later, it is shown that von Bardas survived the attack and she attacks New York City, but is stopped by a team of super-heroes. The government discovered Fury's unsanctioned attack on Latveria and he is exiled, going into hiding.

When Iron Man loses control of his nanite-controlled supervillains, Nick Fury appears to help the heroes stop them. When he got attacked by Venom and Green Goblin, he was gone missing.

In Black Panther's kingdom, Wakanda, Fury is infected by the nanites and is controlled by them, gaining a cybernetic appearance. Nanite Nick Fury has the powers of Electro, Havok, Firestar, Spider-Woman, Bishop, Multiple Man and A-Bomb. After his defeat he returns to his normal self, and is pardoned in the ending. "Nanite Nick Fury" is a playable character obtained by completing the game.

Nick Fury appears in Crimson Viper's ending to offer her a job with S.H.I.E.L.D.