Nidoking (ニドキング, Nidokingu) is one of the 493 fictional species of Pokémon creatures from the Pokémon media franchise.

The name Nidoking originates from the Japanese word nido (二度, nido) meaning "two times" or "two degrees," because of the differences in the genders of the species, as well as from the Japanese pronunciation of "needle," nīdoru (ニードル, nīdoru), since the Pokémon are all covered in many needle-like barbs or spines and king.

Nidoking is a large, powerful creature armed for battle. Its horn, hard enough to pierce a diamond, contains secreted venom, making it a deadly stabbing tool upon prey and Pokémon battle opponents, and its thick tail packs enormously destructive power capable of toppling a metal transmission tower.It can also snap a telephone pole like it were a twig. It uses its tail to smash down its target, then constrict it to break its bones. Nidoking's steel-like hide adds to its powerful tackle, so once it goes on a rampage, there is no stopping this powerful Pokémon.

Nidoking is the masculine equivalent to Nidoqueen. Nidoking is faster and has greater attack, while Nidoqueen has more HP and greater defense. That, along with its drastically different coloring, makes the species therefore eligible for separate classification from Nidoqueen in the Pokedex. There are seventeen different types of Pokémon, and Nidoking is a combination of the Poison and Ground types.

As several Pokémon seem to have been designed to resemble other aspects of Japanese pop culture and mythology, it is interesting to note that Nidoking and his brethren bear a striking resemblance to Baragon, a monster that has appeared in the Godzilla movie series.

In the video games, Nidoking can only be obtained by evolving Nidorino through the use of a special stone, in this case, the rare Moon Stone. It can be evolved at any time in this respect, but since it can only learn a few moves after evolution[1] it is usual for trainers to keep it as a Nidorino until it learns Horn Drill before evolution, then visit a move relearner to teach Megahorn. Nidoking is suited as a physical sweeper, with high Attack and Speed.

As a physical sweeper, Nidoking can take full advantage of its high Attack. High-power moves such as Earthquake, Thrash and Megahorn are recommended. Nidoking also receives STAB from Earthquake. In the first three generations, the damage of Sludge Bomb, another move Nidoking gets STAB from, is also based on ATTACK. However, Sludge Bomb is classified as Special in the forth generation. Megahorn and Earthquake are musts. Of the other slots, Horn Drill can be considered, but better would be moves like Thrash, Brick Break, Sludge Bomb, Iron Tail, Toxic or even Flatter.

A Nidoking is owned by Gary, rival of the protagonist Ash, and was used in his battle against Mewtwo and during the Indigo League in the first Kanto seasons.

Pinkin Island, in the Orange Island season, was the home of a pink Nidoking. The pink colors are produced by the Pinkin Berries, which when eaten in high amounts, makes the eater turn pink. The Nidoking in this episode however went on a rampage after Team Rocket attempted to capture its two youngs which were both a male and a female Nidoran, respectively. Team Rocket started running away from an angry life-threatening horn-driller, and Ash and his friends later get caught up in this conflict. And in the end, they tied up the wild feverish father in ropes and wires with the help of an Officer Jenny.

Both Stage 2 Nidoran evolutions were featured in the 7th season episode called "The Bicker, The Better!", owned by a trainer couple named Oscar and Andy, having a Nidoqueen and Nidoking respectively. The couple likes to do Tag Battles, and Ash and May battled them in their first Tag Battle.

Some Nidokings appear in Pokémon: Lucario and the Mystery of Mew on one side of the warring armies.

In Pokémon Adventures, a Nidoking is owned by Giovanni and used in his battle against Red. 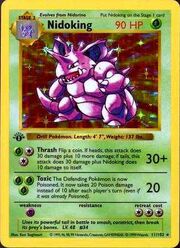 Nidoking has appeared on five different trading cards in the Pokémon Trading Card Game, mostly grass-type. In the Base Set (as well as Base Set 2, and Legendary Collection), Gym Challenge (as Giovanni's Nidoking), Aquapolis (two cards, one ground type, one colorless) and EX Firered and Leafgreen (ground type).

The original Nidoking in Base Set has earned its image as the king of poisoning, for it was a strong card whose Toxic attack did a special type of poisoning that did 20 damage each turn instead of 10. Neo Discovery Beedrill did Nidoking one better, though, with a Triple Poison attack that does 30 damage each turn.

Nidoking's Colorless appearance in Aquapolis carries the Crystal Type Poke-Body, so its type changes each turn depending on what kind of energy card is attached to it.