Nidoqueen (ニドクイン, Nidokuin) is one of 493 fictional species of Pokémon in the Pokémon franchise. The name Nidoqueen originates from the Japanese word nido (二度, nido) meaning "two times" or "two degrees," because of the differences in the genders of the species, as well as from the Japanese pronunciation of "needle," nīdoru (ニードル, nīdoru), since the Pokémon are all covered in many needle-like barbs or spines and queen.

Nidoqueen's super-hard, needle-like scales provide strong protection. It uses its hefty bulk to execute powerful moves. It is adept at sending foes flying with harsh tackles. Nidoqueen uses its scaly, rugged body to seal the entrance of its nest and protect its young from predators. Nidoqueen's ponderous body is surprisingly agile, and its Tail Whip (or Iron Tail) attack can seem to come from nowhere. This Pokémon is at its strongest when it is defending its young. Nidoqueen is evidently the feminine equivalent to Nidoking, as Illumise is to Volbeat, but differences in gender are great enough that the two Nidoran families are classified as different species. [1] Oddly, while shiny Nidoran♂ and it's evolutions are all blue, to resemble Nidoran♀ and Nidorina, Nidoqueen is a Shade of Olive Green, a drastic change from the purple shade of the shiny colors of its previous stages.

Nidoqueen is available in every Pokémon game except Ruby and Sapphire, though players can trade it to those two games by using Fire Red and Leaf Green. In all of the video games, players have to use a Moon Stone on Nidorina to make it evolve into Nidoqueen. Despite the claim of various Pokedex entries, Nidoqueen cannot breed, nor can Nidorina. You must use the female Nidoran to gain young Nidoran of that gender. This is most likely an error that has not yet been fixed (compare with Azurill's gender). Nidoqueen and Nidoking have similar but different stats. Nidoking's Attack, Sp. Att. and Speed stats are higher, but Nidoqueen has higher HP, Defense, and Sp. Def.

Nidoqueen appears in an episode while Ash is travelling the Orange Islands. One of the Gym Leaders has one, and it helps him to make a boat out of ice. It is also featured in Pokémon: The First Movie or Pokémon: Mewtwo Strikes Back, where it is owned, ironically, by a Water Pokémon Trainer by the name of Fergus. Gary Oak owns a Nidoqueen. Gary first used his Nidoqueen to defend his grandfather's lab from Team Rocket in Episode 113 (A Tent Situation). Gary also used Nidoqueen in the match against Ash in the Johto league. Gary used it to beat his Tauros but it was then defeated by Ash's Snorlax. Both Stage 2 Nidoran evolutions were featured in the 7th season episode "The Bicker, The Better!", owned by a trainer couple named Oscar and Andy, having a Nidoqueen and Nidoking, respectively. The couple likes to do Tag Battles, and Ash and May battled them in their first Tag Battle. Near the end of Pokémon: Mewtwo Strikes Back, Mewtwo's Nidoqueen (clone), is shown to have given birth to baby Nidoqueen (which look like miniature Nidoqueen). This may suggest that Nidoqueen (and possibly Nidorina) give birth to live young as opposed to laying eggs like most Pokémon (which may explain why they don't produce eggs in the video games). However, this has also confused some fans, due to the baby Nidoqueen being at their last evolved form {when Pokémon give birth or lay eggs the young are born at their first stage of evolution.}

Blue had a Nidoran♀ Pokémon Special that later evolved into a Nidorina and then into Nidoqueen.

Giovanni had a Nidoqueen. Red also caught a Nidoqueen in the Safari Zone. 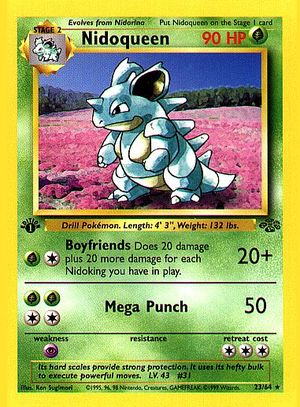