The name Nidoran♀ follows the same conventions as those of the other Pokémon in the Nidoran family. Nido (二度, Nido) is the Japanese word for "two times" or "two degrees," which is indicative of the differences in the genders of the species. Nīdoru (ニードル, Nīdoru) is also the Nipponicized pronunciation of "needle", which Nidoran are covered in. "Ran" may derive from pacarana, a South American type of rodent. It evolves into a Nidorina then into a Nidoqueen.

In 2006, Nidoran♀ was included in the female bracket of GameFAQs' Character Battle after receiving enough nominations. It lost to Samus Aran in the first match of the tournament.

Nidoran♀ looks like a small, blue rabbit. It has buck teeth, spines sticking out of its back, and large ears, although Nidoran♂ have larger ones.

Although small, their sharp barbs render them dangerous. The female has smaller horns than the male. They are mild-mannered, but secrete venom from their small horns when they feel threatened. Although not very combative, it will torment its foes with its spikes if threatened in any way.

Shiny Nidoran♀ are Purple, the same as the natural color of its male counterparts. It keeps this color in its next evolution, but it changed drastically in its final stage.

Before the concept of Pokémon genders was introduced in Gold and Silver, Nidoran♀, Nidoran♂, and their evolutions were the only Pokémon that could be identified by gender. The Nidoran are the only Pokémon prior to the release of Pokémon Diamond and Pearl to have gender-specific evolutions; for the purposes of the games, however, the two genders have always been treated as distinct species with separate Pokédex entries for both themselves and their evolved forms.

Nidoran♀ was introduced in the first Pokémon games and has been available in every Pokémon video game except Ruby, Sapphire and Emerald. It remains fairly common and is usually one of the first Pokémon the trainer catches.

Nidoran♀'s statistics are below average. Compared to its male counterpart Nidoran♂, it has higher defences in trade for lower speed and attack. Nidoran♀ evolves into Nidorina upon reaching an early level 16.

In episode #102, Wherefore Art Thou, Pokémon?, the heroes meet a Nidoran♀ and a Nidoran♂, owned by a girl, Emily and a boy, Ralph, respectively, who have fallen in love, even though Ralph and Emily hate each other. This Nidoran was named Maria. Ralph and Emily eventually had to cooperate if they were going to save their Nidoran from Team Rocket. After the battle with Team Rocket, and after kissing Ralph's Nidoran♂, Emily's Nidoran♀ evolved into Nidorina.

Nidoran have played a small part in the series since, only appearing from time to time and not playing any major roles.

Blue had a Nidoran♀ in Pokémon Special. It later evolved into Nidorina and then Nidoqueen. She used it in Indigo Plateau to attract Fisher Wliton's Nidoran♂ and to persuade him to trade his Butterfree for her Weedle; she was stopped by Red

Bill had a Nidoran♀ in Pokémon Zensho that he accidentally merged with in a transporter experiment. 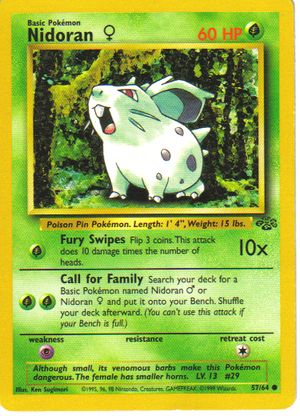