Nidorino (ニドリーノ, Nidorīno) is one of the 493 fictional species of Pokémon creatures from the Pokémon media franchise. The name Nidorino comes from the Japanese word nido (二度, nido) meaning "two times" or "two degrees" because of the differences in genders and evolutions of the species, or from the Japanese pronunciation of "needle," nīdoru (ニードル, nīdoru?) since this Pokémon is covered in many needle-like barbs or spines, along with a suffix of -o, which means "boy" in other languages, such as Spanish and Italian. "Rino" may also be a misspelling of "rhino" because this Pokémon's trait is a rhino-like horn and is Latin for nose.

Nidorino looks a bit like a purple rhinoceros and more like a rabbit with needles and horns all over. It is a fearsome Pokémon with vicious attacks.

Nidorino is an aggressive Pokémon that is always quick to attack when it notices an attacker: its large ears are always on the lookout. The horn on its head secretes a powerful venom and on impact with an enemy; poison leaks out. This horn is harder than diamond and can easily punch through it simply by swinging. If it senses a hostile presence, all the barbs on its back bristle up at once and it challenges the foe with all its might.

Nidorino is the male counterpart of Nidorina

Nidorino first appeared in Pokémon Red and Blue (outside of Japan), and is the second form in the Nidoran♂ evolutionary line. It appears in the intro of the Red version battling a Gengar. It evolves from Nidoran♂, and evolves into Nidoking by means of an evolutionary stone. Prior to the introduction of individual genders for most Pokémon, Nidoran♂ and Nidoran♀ were the only Pokémon with genders.

Nidorino appears in a number of episodes of the Pokémon anime, almost always alongside his female counterpart, Nidorina. He is famous for being the 2nd Pokémon seen in the anime (Gengar was the first). In "Wherefore art thou, Pokémon?" the Nidorans owned by Ralph and Emily evolved into a Nidorina and Nidorino after the battle with Team Rocket.

In Pokémon Special, Nidorino debuted in the first round of the Red, Green & Blue chapter, A Glimpse of the Glow, where Red caught it to show to the Pallet Town children how to catch a Pokémon. 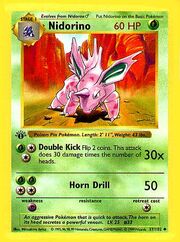 Nidorino has appeared in the Pokémon Trading Card Game in: