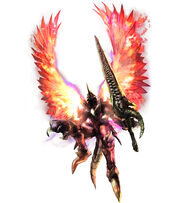 Night Terror is created when the energies of both Soul Edge and Soul Calibur fuse with the remains of Nightmare, which contained Soul Edge's soul, Inferno. In Soulcalibur III: Arcade Edition, Night Terror remains a non-playable boss character, though this time he appears at random in the arcade's end match, alongside Abyss.

Night Terror has special attributes in in-game combat; for instance, he can't be defeated by ring out. If he is knocked out of the ring, a cut-scene plays in which Night Terror uses his wings to fly back to the arena.