Originally released to arcades in 1995, the game was ported to the Sega Saturn in 1996 and later to the PlayStation 2 in the compilation title,Vampire: Darkstalkers Collection which featured an additional alternate version of the game. In 2013, the game was bundled with Darkstalkers 3 and released with HD enhancments as Darkstalkers Resurrection. 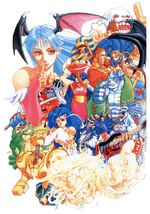 Night Warriors introduced two new characters, Donovan and Hsien-Ko. Both characters hunt Darkstalkers. The boss characters, Huitzil and Pyron and now playable with their own endings.