Ninetales (キュウコン, Kyūkon, Kyukon in original Japanese language versions) is one of 649 fictional species of Pokémon in the Pokémon franchise. It is the evolved form of Vulpix, and is one of the original 150. Ninetales is inspired by a Japanese fox spirit, the kitsune. A kitsune is an ordinary fox, but in legend it can grow to extreme age and gain magical abilities, such as transforming into beautiful women and the use of "fox fire." With age, it gains more tails; the kyūbi-no-kitsune, or nine-tailed fox, is final and most powerful form (except for Inari, who is sometimes depicted as a ten-tailed kitsune). So, too, is Ninetales the most experienced fox Pokémon. Much like a kitsune, Ninetales is very clever and sinister. Also like the kitsune, when Vulpix evolves into a Ninetales, Vulpix's red fur turns pale yellow. If the Vulpix is shiny (gold), it will turn silver.

The name Ninetales is a reference to Ninetales' nine tails. The name is also a reference to a Chinese myth of a nine-tailed fox spirit who serves under Nuwa, and the Japanese. Ninetales' Japanese name, Kyukon, is probably a portmanteau of the Japanese word for nine (九, kyū) and kon, which comes from kon kon, an onomatopoeia describing the bark of a fox, or an alternate reading of the Japanese word for kitsune (狐, kitsune), meaning fox - in this case, the reading is ko (こ, ko). In the beta, it was known as Nine Tales.

Ninetales is highly intelligent, but vengeful; Ninetales have been recorded going to extreme lengths to enact complicated revenge on those that offend or harm them, like putting a 1,000 year curse on anyone who touches one of their tails. They (as well as Vulpix) have keen senses of smell, hearing, and sight. A Ninetales is believed to have 9 hidden abilities, one for each of their nine tails. They are Pokémon who have an extremely good sense of justice, along with being strong and long-living; however, their logic which is good can become twisted quite easily(perhaps due to living for such extreme periods of time).

Ninetales is the second longest-lived of all Pokémon with lifespans of up to 1000 years (Rayquaza being the longest living and possibly rock types).

Its signature attacks derive from two flame sacs located in the neck, which project from two ports on the back of the mouth. Although its flame is not as hot as other species (such as Flareon), it can project flame for a longer period of time than most species (with the notable exception of Charizard). If these flame sacs are punctured, the Pokémon suffers a fate similar to liver failure if not quickly treated.

Ninetales, as a species, are highly concerned when it comes to the young; in the Pokémon universe, tales of Ninetales helping children (and their parents, if present) out of blazing buildings or through harsh winter climates are common. They also perform the same courtesy for baby Pokémon. However, they do not raise Pokémon of other species, nor humans, any more often than a normal animal.

According to legend, nine noble saints were united and reincarnated into this Pokémon. Some legends claim that each of its nine tails has its own unique type of special power. They are attributed with many mystical powers: laying curses, mind control, the ability to control fire, invisibility, and more. However, these reports are only mentioned sporadically, if at all.

There are no Pokémon video games where Ninetales can be caught in the wild. However, one may use a Fire Stone on Vulpix, thus evolving it into Ninetales. Thus, the availability of Ninetales depends on the availability of Vulpix. Since the Hoenn games, all Ninetales possess the Flash Fire ability, making it impervious to all fire-type attacks and able to increase its own firepower when hit by fire-type attacks. Ninetales has notably high Special Defense, Speed, and average Special Attack and Attack. It also possess a unique range of movepool, dominated by supportive moves such as 'Grudge' and 'Safeguard'.

In Pokémon Mystery Dungeon for the Nintendo DS and Game Boy Advance, a human was foolish to grab one of Ninetales' tails, but just as the curse was about to be laid, his Gardevoir stepped in and shielded the human, sacrificing its own life (possibly) as the coward ran off. Ninetales appears later to clear the protagonist's name, explaining that the protagonist was not the human in the legend, and that the natural disasters occurring in the world and the human turning into a Pokémon are not related. However, it is later on revealed that the real fugitive from the legend whom tried to pull off a tail of the Ninetales is actually the Gengar from the rival rescue team who falsely accused the protagonist at the beginning. Gengar, when it was still human, managed to avoid the curse of the Ninetales but was shortly tracked down by another mysterious force which dragged him into the world of Pokémon and turned him into a Gengar as a punishment for his indignity, and he lived that way ever since.

In the anime, as well as with a Fire Stone, Vulpix can evolve into Ninetales by living for one thousand years (this was inspired from kitsune myth, in which a kitsune gains a new tail every century it lives).

In the TV series, Blaine, the Cinnabar Island gym leader, uses a Ninetales against Ash Ketchum's Squirtle, a Water-type Pokémon, proving victorious despite the type disadvantage.

In "Beauty and the Breeder," a Ninetales belonged to Suzie's old friend Zane.

Later in the series, the gang meets a 200 year-old Ninetales who tries to subdue Brock into staying with her by using an illusionary woman because Brock closely resembled her former master. This episode was named "Just Waiting On A Friend" and was even more closely linked to the Kitsune myth. A Hoshi-no-Tama (Star Ball) inspired Pokéball was also used in the episode.

Ninetales was one of the Pokémon that were cloned by Mewtwo in Pokémon: The First Movie.

In Pokémon Special, Red and Green both tried catching the same Ninetales. In the scuffle for its PokéBall, Green managed to grab it first. Courtney of Team Magma uses a Ninetales as her main battler.

In Pokémon Mystery Dungeon: Ginji's Rescue Team, the curse that Ninetales can conjure is one of the main points of the plot. 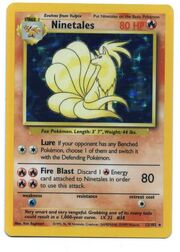 There are thirteen different Ninetales cards in print right now (reprints aside) in the Pokémon Trading Card Game.

They are in the