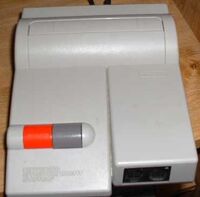 The Nintendo Entertainment System (NES) is the North American and European name for the Family Computer released in 1985 by Nintendo. It is a third generation console, and one of the biggest successes in the video game industry's history. It is often credited with reviving the video game market after the collapse of Atari. A redesigned top-loading version was released in 1993. This console marked the end of the video game crash of 1983.

Hiroshi Yamauchi, Masayuki Uemura, and the Nintendo team began working on a console in 1980 that would be called the Family Computer. After the video game industry crash of 1983 caused by Atari, video games were seen as a passing fad in the United States. It was during this turbulent time that the Family Computer would be released in Japan.

Nintendo struck a deal with Ricoh to produce 3 million 6502 processors within a two year period for 2,000 yen a chip. The name was changed from Family Computer to Nintendo Entertainment System for the Western market to create the impression that it was a system that did not just "play games", but entertained as a whole. This distinction is something that console developers strive for even today.

In order to convince retailers such as Sears to stock their new NES, they included many accessories and peripherals like R.O.B. the robot and the Zapper, a light gun. To garner further retail support Nintendo promised said retailers that they would buy back all unsold units. Nintendo of America first debuted the NES in New York City, where it was met with success, prompting them to release it a few more markets like Los Angeles, before releasing it to the entire country in 1985.

The NES came in two sets, the arcade set which included Super Mario Bros., and the deluxe set was bundled with a light gun and three games. The two sets managed to sell over 60 million units over its life-cycle of six years (ending when the Super Nintendo Entertainment System was released in 1991). However, the last game for the NES was released in 1995.

By 1987, the NES held most of the Japanese and North American markets and had little to fear from the Master System's release, due to both the popularity of their games and the stranglehold Nintendo had on their licensed third-party game developers.

In comparison to its considerable success in Japan and North America, the NES had much less success in Europe and South America, with SEGA's Master System being significantly more successful than the NES in these regions.[1][2]

The NES released in Europe on September 1, 1986

Nintendo's main competition was with the Master System and the Atari 7800, the latter of which was delayed for two years from its intended release date due to the video game industry crash that left the American video game market uncertain as to whether it was going to recover. However, with the combination of popularity surrounding the software that the NES had to offer gamers, and the stiff stranglehold Nintendo's third-party licensing system had on its software supporters preventing them from releasing similar games for competing systems for at least two years, the Master System and the Atari 7800 suffered greatly in the marketplace. Video game rentals didn't help the competition, as most rental stores and chains would only carry NES games. SEGA would answer back with a vengeance when it released its Mega Drive system in America as the Genesis in 1989, while Atari prepared for its own comeback attempt with the Jaguar, released in 1993.

In comparison to its considerable success in Japan and North America, the NES had much less success in Europe and South America, with SEGA's Master System being significantly more successful than the NES in these regions.[1][2]

Many successful franchises and games were started on the NES. Games like Castlevania, The Legend of Zelda, and Mega Man debuted on this console, making it one of the most influential platforms in video game history.

The Nintendo Entertainment System had very few expansion items released for it in America, and most of it was by third-party companies not licensed by Nintendo. British-based developers Codemasters developed an adapter for the system called the Game Genie that would allow gamers to temporarily alter elements of their games to make them either easier or more challenging to play. Galoob was ready to distribute the Game Genie in America, but Nintendo successfully blocked its release until a year later when the decision was overturned in favor of Galoob. (The Canadian-based Camerica, however, succeeded in releasing the Game Genie in 1990 in Canada.)

The Nintendo Entertainment System is given much of the credit for re-vitalizing the home video game industry. By keeping tight control over the content, quality and production of all games released on the system Nintendo was able to avoid many problems that plagued the Atari 2600 such as overproduction and cheap low quality games cutting into sales of quality titles. Despite the positive effects this level of control had Nintendo is also strongly criticized for these policies during this time period.

Nintendo is partially criticized for the lacklustre sales of both the Master System, and the Atari 7800 in the United States due to their strict third party agreements. It is said that Nintendo placed restrictions on third party game developers, allowing them only to produce games for the NES, lest they face large fines, or even a drop of support. It is because of this, the other systems of the time only had their companies respective back catalogues to draw games from, whereas the NES had a wealth of new games.

As Nintendo's system became more popular many retailers and toy stores became more resentful at the company. Nintendo products and games accounted for a significant portion of retailers profits. Because of the dependence on the NES and it's games stores had to play by Nintendo's rules or risk losing their supply. Immediate payment was required for all orders rather than end of the year billing. Competitor system and games or unlicensed NES games could not be carried. Stores could not markup or markdown prices on games. Nintendo started a no return policy that conflicted with the customer satisfaction guarantees of most stores and instead had a service network customers could send defective systems and games to. Some companies tried to boycott Nintendo products in protest, but the loss in sales had those stores conceding to Nintendo's policies before long.

During the late 1990s and early 2000s the NES became much more than a video game system released 10 to 20 years ago in the eyes of the public. It became quite possible to see someone wearing a NES controller belt or other "retro" styled clothing covered with images Nintendo started.