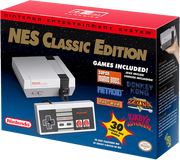 Nintendo Entertainment System Classic Edition, colloquially known as NES Classic, is a dedicated console by Nintendo that emulates the Nintendo Entertainment System (NES). It was launched on November 10, 2016 in Australia and Japan, and the next day in North America and Europe. The console, aesthetically, is a miniature replica of the NES, and it includes a static library of 30 built-in games from the licensed NES library, supporting save states for all of them.