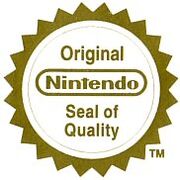 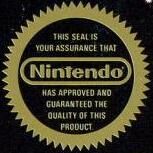 American, Nintendo quality seal (1985-1988).]] One of the major reasons for the Video Game Crash of 1983 was customer dissatisfaction with a large portion of the introduced games. They were considered technically poor, tasteless or both; a particularly notorious example is Custer's Revenge. Many games were simply commercial tie-ins, such as the much maligned video game version of E.T. the Extra-Terrestrial. The Atari 2600, the biggest console on the market, had no lockout device, so anyone who could get programming tools could make and market a game for it. Games were rushed to market, resulting in poor titles and low consumer credibility.

Gamers understandably were wary of game makers when the Nintendo Entertainment System came out in 1985. The 10NES lockout chip solved the problem of controlling access to the console (for the most part), but there was the issue of customer confidence. So Nintendo introduced the Seal of Quality to show gamers that the games had met quality control standards in terms of basic programming and that the games would be suitable for the entire family and thus free of objectionable content. It was mainly a marketing ploy, but it worked – consumers were reassured, and the NES became a great success.[citation needed] Publishers were encouraged to create high-quality titles in other ways as well. Each publisher was only allowed five releases per year, so effort was put into making those few titles successful.[citation needed]

Originally, for NTSC countries, the seal was a large, black and gold circular starburst. The seal read as follows: This seal is your assurance that NINTENDO has approved and guaranteed the quality of this product. This seal was later altered around 1988; approved and guaranteed was changed to evaluated and approved. In 1989, the seal became gold and white, much like it appears today, with a shortened phrase Official NINTENDO Seal of Quality. The symbol remained unchanged until 2003 when the of Quality segment was removed.

When the Official Nintendo Seal of Quality was used, the meaning of the seal was explained as follows:

This official seal is your assurance that Nintendo has approved the quality of this product. Always look for this seal when buying games and accessories to ensure complete compatibility with your <insert name of Nintendo system here>.

Basically this meant that the cartridge works in the named hardware, it had nothing to do with the written quality of the software.

The current Official Nintendo Seal is explained as follows:

The official seal is your assurance that this product is licensed or manufactured by Nintendo. Always look for this seal when buying video game systems, accessories, games, and related products.

Aside from being more general in its description, the Official Nintendo Seal does not vouch for quality like the old Official Nintendo Seal of Quality did. The reason for the change has never been officially given by Nintendo, but it is generally assumed that since the extremely low-quality games (sometimes pirated to Nintendo systems) of the 1980s are mainly a thing of the past, Nintendo no longer felt comfortable in labelling all of the games they published as being quality games. Perhaps they also did not want to confuse this seal of quality with the player's choice games, which are popular games that Nintendo guarantees to appeal to most.