From Codex Gamicus
(Redirected from Nintendogs)
Jump to: navigation, search

Nintendogs is a series of virtual pet simulation video games by Nintendo,for the Nintendo DS.

There are 6 versions of the game, each game with several different breeds of dog, and exclusive items:

The Labrador and Shiba versions are essentially the same set of dogs, only with a different dog on the cover. This was done because while Shiba are popular in Japan, they are not as popular elsewhere as Labs are. 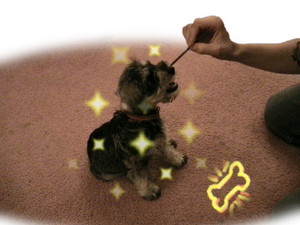 This photograph shows how realistic Nintendogs is.

The most unique aspect of Nintendogs is the ability to teach your dogs tricks in a way that very accurately resembles real life. Just like in real life, if you want to teach your dog a trick, you gently guide your dog into the position (for shake, grab his paw, for roll-over, gently push his belly while he's lying down, for sit, rub downwards on his head) and then tell him the name of the command, then reward him for doing it. Repeat this over and over and he'll eventually learn the trick.

There are no preset names to tricks. Meaning you can call your trick whatever you want, for each individual dog. You 'roll over' for your Shiba Inu may be 'roll over', but for your Toy Poodle you could train it so that when you yell 'DIE!!!' it falls on its back and sticks it's feet in the air.

If you have taught your dog all 'known' tricks, try telling your dog to do one trick, then another. These combinations are slightly harder for your dog, but none of the other dogs will know them! Try 'TurnAround'. Tell your dog to 'beg' then 'spin' and it will hopefully turn around whilst in beg. 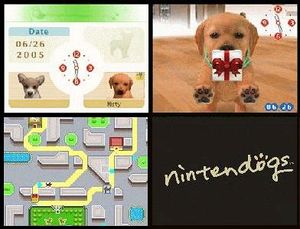 There are three contests in the game, which you can enter your dog in to earn money. They are:

You can set your system to 'Bark Mode', where your dog (and an item, should you choose to give him or her one) will walk around 'barking' for other dogs. When you put the game in 'Bark Mode', the DS wirelessly searches for other dogs in Bark Mode. If it finds one, your dog will bark to alert you (even if the DS is closed, in sleep mode.) Both dogs will play together in a common field, and the trainers will receive each other's items, and hear what's been recorded on each other's White Record. The White Record is an item that lets you record up to 10 seconds of audio to play back whenever you like, and to send to other people you meet in Bark Mode.

Much like Animal Crossing, Nintendogs is set in a persistent world. Meaning if you don't play it all day, your dog will be hungry next time you turn it on. The game follows the DS's internal clock, and adjusts night and day accordingly. Your dog will sleep at night, and be more energetic in the day. Your dog requires at least 30 minutes of rest between walks, and can only enter 3 competitions a day. There's also a limit on how many times you can walk your dog or teach them new tricks before they get tired of it.

When you first get a dog, you can only teach it 2 tricks a day, soon it can do 3 and after a little while, it can do 4.

All dogs can be unlocked from any version (including 2 hidden dogs) but each version starts with its own set of six dogs to choose from.

Criticism for Nintendogs ranges from "They're not enough like real puppies!" to "They're too much like real puppies!" but almost always translates to "I'm an idiot." Despite near-perfect reviews across the board, gamers still like to call it a kiddy game or find other inane reasons to make themselves not like it. This tends to happen a lot with games that are both 'cutesy' and open ended, such as Animal Crossing. These types of games are, ironically, often enjoyed by older more mature gamers, whereas younger teenage gamers tend to call them 'kiddy'. As some think this, others love the game, young or old because of the 'real factor' of the dogs.

The following is a list of the most frequently used arguments against Nintendogs, by people who have never played Nintendogs:

The game is, however, not perfect.