Noctowl (ヨルノズク, Yorunozuku in original Japanese language versions) is a fictional character of the Pokémon franchise.

Noctowl's name derives from the words nocturnal and owl. Its Japanese name is a portmanteau of 夜の (, yoruno), of the night, and 青葉梟 (, aobazuku), the Brown Hawk Owl. Its name thus translates to "owl of the night".

Noctowl bears close resemblance to the owl. It is a large bird whose plumage is colored in various shades of brown. Its round head has two piercing red eyes and two large "eyebrows". These eyesbrows, surprisingly, hold a very important effect. They help balance Noctowl while it is flying to increase its aerodynamics.

Noctowl is a nocturnal Pokémon. Like most Pokémon which are active during the night, Noctowl possesses superior eyesight. Its eyes are specially adapted so that they can concentrate even faint light and retain satisfactory visibility even in almost complete darkness. This ability is shared by real world animals such as its counterpart, the owl, as well as cats.

When hunting, Noctowl puts its prodigious eyesight to good use to hunt down prey without fail. It is also very good at sneaking up to its victims unnoticed thanks to its supple, soft-feathered wings that allow it to fly without making any noise.

In the Pokémon world, Noctowl, just like the owl, is regarded as an icon of intelligence and wisdom. When a Noctowl needs to ponder especially deep thoughts, it can rotate its head 180 degrees, which serves to increase its intellectual faculties. The ability to rotate its head is another trait shared by its real world counterpart. However, real owls are not very intelligent.

In Pokémon Colosseum, Noctowl is a Shadow Pokémon that can be Snagged in Pyrite Town.

Noctowl has some average statistics, and its Hit Points and Special Defense are very good, but it has poor Defense, and worst of all, Attack. This means that it cannot use effectively the few powerful offensive moves it learns naturally. Noctowl is unusual in that it can learn both Hypnosis and Dream Eater without belonging to the Psychic type. If one chooses to use Noctowl in battle, one may want to aim for a strategy other than dealing damage directly, such as disrupting and forcing the opponent to switch Pokémon.

As of 4th generation, Noctowl has become a much more useful Pokémon, due to a more expansive move set, and more importantly, the split of physical and special attacks. Noctowl's 76 base Special Attack is much better than its Attack, and it may learn useful Special Attacks like Psychic, Air Slash, and Hyper Beam, finally giving it a viable source of upfront damage. It is still better suited for a support role, however, rather than a special sweeper.In Pokemon Diamond and Pearl, Noctowl can be caught in Celestic Town at night.

A shiny Noctowl has been part of Ash's team during his travels in Johto (As his Johto replacement for Pidgeotto/Pidgeot). Ash frequently used Noctowl to explore an area from the sky, or to puncture Team Rocket's hot-air balloon. Ash used it in many battles throughout Johto, but it is currently living in Professor Oak's lab since Ash decided to make a fresh start and leave all of his Pokémon except for Pikachu when he left for Hoenn. Also, in the Master Quest arc, an episode called Throwing in the Noctowl involved an old man and his Noctowl trying to fly Ash and co. to the next gym. It is also implied that this Noctowl is older than Ash's.

Noctowl is seen as one of the Pokémon under Falkner's ownership. 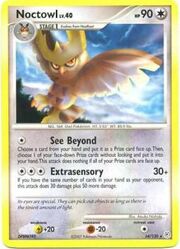 Noctowl has but a slight influence in the Trading Card Game. It is stage 1 and colorless in all its cards: