The N-Gage is a mobile telephone and handheld game system based on the Nokia Series 60 platform. It started selling on October 7, 2003. It attempted to lure gamers away from the Game Boy Advance by including cellphone functionality. This was unsuccessful, partly because the buttons, designed for a phone, were not well-suited for gaming and when used as a phone the original N-Gage was described as resembling a "taco".

In 2005, Nokia announced that it would move its N-Gage games capabilities onto a series of smartphones. These devices are available since early 2007, and games will be ready for download from the official web site starting from November. 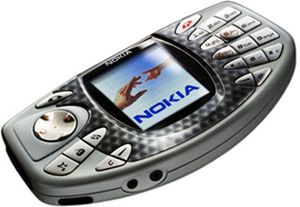 In the late 1990s, gamers increasingly carried both mobile phones and handheld game systems. Nokia spotted an opportunity to combine these devices into one unit. They developed the N-Gage, a device that integrated these two devices. Instead of using cables, multiplayer gaming was accomplished with Bluetooth or the Internet (via the N-Gage Arena service). The N-Gage also included MP3 and Real Audio/Video playback and PDA-like features into the system.

The N-Gage was not as commercially popular as Nokia estimated. In its first weeks of availability in the United States, it was outsold by the Game Boy Advance by two orders of magnitude (500,000 units vs 5000). Within 17 days of the deck's release, popular retailers GameStop and Electronics Boutique began offering $100 rebates on the deck's price.

The poor sales performance can be attributed to the poor selection of games compared to its competitors and its cost at launch; it was more than twice as expensive as a Game Boy Advance SP on release day. Poor sales were also amplified by game media being standard MMC memory cards and as with most consoles piracy did become an issue.

Besides its gaming capabilities, the N-Gage was a Series 60 smartphone, running Symbian OS 6.1, with features similar to those of the Nokia 3650 (it does not have an integrated camera, however). It was able to run all Series 60 software, and Java MIDP applications as well. Its main CPU was an ARM Integrated (ARMI) compatible chip (ARM4T architecture) running at 104 MHz, the same as the Nokia 7650 and 3650 phones.

As of August 2007, it was estimated that Nokia had shipped more than two million N-Gage game decks. The "N-Gage" brand name still had a poor reputation within the gaming media and the few consumers who recognized the N-Gage brand, due to the weakness of the system's first games and the original model's limitations. Many gamers were unaware of the later QD redesign and still consider the N-Gage as a joke. The situation has not improved either with the arrival of the PlayStation Portable and Nintendo DS handhelds. As of September 2005, Nokia had more than 50 games available for the system.

While the N-Gage didn't have any significant financial successes, it did have a handful of critical successes. Pocket Kingdom: 0wn the World received a handful of glowing reviews when it was released, and Pathway to Glory was Nokia's first self-published success. These games came perhaps too late to have much effect in improving the perception of the N-Gage hardware itself in the eyes of consumers or press.

In January 2005, UK sales-tracking firm ChartTrack dropped the N-Gage from its regular ELSPA chart, commenting that "The N-Gage chart, though still produced, is of little interest to anyone. Sales of the machine and its software have failed to make any impact on the market at all." Although only directly reflective of the UK market, this was interpreted by some as a serious blow to the N-Gage as a viable gaming platform. Despite this, Nokia reaffirmed their commitment to the N-Gage as a platform, to the point where a new version of the hardware was rumored after GDC 2005.

February 2005 saw Nokia appoint Gerard Wiener, formerly of Sega Europe, to the post of Director and General Manager for Games at Nokia. Wiener steered Nokia away from looking at the N-Gage as primarily being a games console to "this is a mobile phone that is great for playing games on." This strategy, along with targeting niche franchises such as the table-top Warhammer 40,000 series, the Rifts RPG series, and the Settlers of Catan board game, has kept sales of the N-Gage healthy and gotten the platform a modicum of respect from some quarters of the media. It should be noted that this change coincided with the initial releases of the Sony PSP and Nintendo DS. 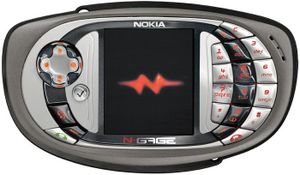 The last game to be released in the US for the system was Civilization on March 2006 according to Metacritic.com. In November 2006 Nokia released its last game for the N-Gage QD. Combat racer Payload is still available to download for $19.65 from the Nokia Game Shop.

The system continues to be sold in the Chinese and Indian markets.

There is some disagreement in sources about the actual number of N-Gage decks sold. Nokia initially claimed 400,000 sales in the first two weeks the deck was available. However, independent market research firms Chart-Track and Arcadia Research claimed that the N-Gage had sold only 5000 decks in the United States in that time, and 800 decks in the UK. Critics suggested Nokia was counting the number of decks shipped to retailers, not the number actually purchased by consumers. Nokia later admitted this was the truth.

In 2004, Nokia claimed in a press release that it had shipped its millionth deck, represented as a company milestone despite falling short of the company's initial projection of six million decks by the end of 2004. However, this number shipped doesn't give a reliable picture of the actual sales of the deck. Nokia ultimately shipped 2 million N-Gage decks by 2007.

In all cases, sales of the N-Gage and N-Gage QD have been counted together.