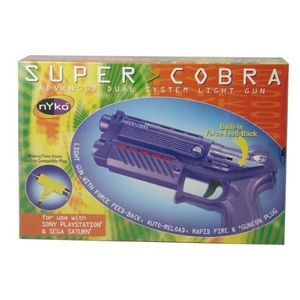 NyKo Super Cobra or simply Cobra Light Gun was a light gun for the Saturn, and PlayStation consoles, the peripheral itself being advertised as an "Advanced Dual System Light Gun". Although short lived in line of production, it has received excellent reviews and continues to be a well used light gun even on newer consoles to this day. Two versions were released one with a split-way containing the Saturn and one with a GunCon plug. 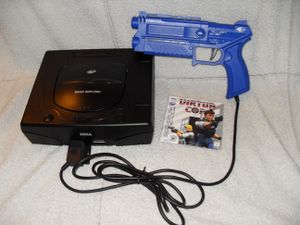 Super Cobra Connected to a Saturn. 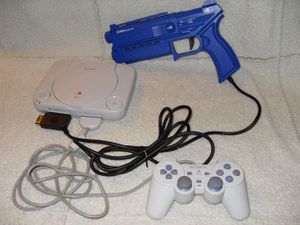 Several games work well with the light gun including Virtua Cop & Virtua Cop 2 for the Saturn, alongside Area 51, Time Crisis and Resident Evil for the PlayStation.

The gun may need to be aligned to your analog TV Set in order for it to aim properly. To align the gun, point it at your television set, then push the left upper slider to the far left ("SET") position. Once in the "SET" Position, simply aim and shoot at a target in the center of your screen ten times. Continue to shoot at until the gun's LED lights remain on. Then switch the slider from "SET" to "NORM" or the desired mode and test your changes. If you did not have the gun properly aligned you can repeat this step to re-align the gun.

Video games such as Virtua Cop have a "Gun Adjust" in their options menu to help aid you in this process.