The Legend of Zelda: Ocarina of Time

From Codex Gamicus
(Redirected from Ocarina of Time)
Jump to: navigation, search

The Legend Of Zelda: Ocarina of Time is the fifth game in the Legend of Zelda series. It is considered by some critics to be the greatest game ever made. It was the first of the 3D Zelda games and is ranked the #1 game of all time on GameRankings. Many consider it's transition from 2D overhead to 3D third person to be one of the best transitions since Super Mario 64. Since its release, Ocarina of Time has sold more than 7 million copies for the Nintendo 64 and has been re-released on many systems, including the Wii's Virtual Console.

It later had a remake for the Nintendo 3DS, titled The Legend of Zelda: Ocarina of Time 3D, which was released in June 2011.

A direct sequel, The Legend of Zelda: Majora's Mask, was later released for the Nintendo 64.

The Legend of Zelda: Ocarina of Time is an action-adventure game set in the kingdom of Hyrule. The player controls Link (or more specifically, the Hero of Time). Link's primary weapons are a sword and shield, but he has access to other weapons, including bombs, projectiles, and magic. Ocarina of Time introduced a number of new features, the most notable being "Z-targeting": By pressing the Z button, the player can keep focus on a specific object, such as an item of interest or enemy, allowing for direct action or attacks. Also introduced were context-sensitive actions, simplifying the control scheme by assigning multiple actions to the same button.

The overworld contains several dungeons — large self-contained areas with a single entrance in the overworld. Within most dungeons, Link must battle several monsters and solve complex puzzles in order to progress through, finding items such as the Dungeon Map, Compass, and keys to unlock doors. A dungeon always contains a special weapon or item, which is often needed to defeat the boss in the final room. The bosses usually require some form of strategy to defeat them, and later on in the game, a boss key is required to enter the boss lair.

Ocarina of Time is separated into two time periods, separated seven years apart. There is the time when Hyrule was prospering, when Ganondorf was merely a Gerudo honoring the King. Link was a boy (Young Link as he was called in Super Smash Bros. Melee) wielding a Kokiri Sword, living in Kokiri Forest. However, after Link opens up the Temple of Time, he pulls the Master Sword from its resting place, sending him in the future and opening the way to the Light Temple. Unfortunately for Link and all living creatures in Hyrule, Ganondorf had followed Link, and took the opportunity to take the Triforce.

Link wakes up seven years later. He is now an adult, and is debriefed in the Temple of Light by the sage Rauru. In the seven years between Link's mistake in letting Ganondorf get to the Triforce and waking up today, Ganondorf used the power of the Triforce to take over Hyrule. The sky is now black around Hyrule Castle. Hyrule Castle itself is now a black fortress, floating over a lava-like pit. The fish people, the Zora, have had their once thriving underwater city frozen, including their King. The rock-like people, the Gorons, have abandoned their mountain homes.

To set things right, Link must go to different elemental temples and collect a medallion to awaken the sages who can put a stop to Ganondorf. With the help of a mysterious masked Sheikah named Sheik, Link will gain new weapons and learn new songs to help him save Hyrule.

The Legend of Zelda: Ocarina of Time is widely considered one of the best games of all time. 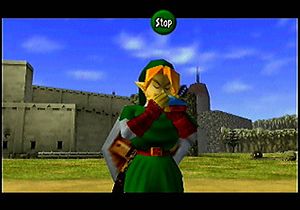