Octoroks are fictional creatures that appear in The Legend of Zelda series of video games. One of the series' most common and recognizable enemies, they have appeared in almost every Zelda game to date.

In many of the Zelda games, Octoroks have appeared across the overworld and other areas as land-dwelling animals, but in Ocarina of Time, they also started appearing as aquatic enemies who attack similarly to Zoras from previous games. However, in prototype versions of Ocarina of Time, they were the same design as A Link to the Past. They appear as octopus-like enemies that can shoot rocks from their mouth, hence the name.

The Legend of Zelda[edit | edit source] 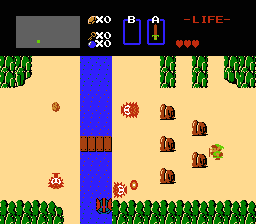 Octoroks from The Legend of Zelda.

The Octoroks are creatures that come in shades of red and blue, and shoot rocks at Link. Blue Octoroks are more dangerous as they take two hits to die as opposed to one unless you have the magical or white sword. They are commonly found in the areas near the game's starting point.

The Adventure of Link[edit | edit source]

Their appearance remained the same for the most part, but only some actually move around. Some jump in place, firing as it jumps. As in the first game, there are Blue and Red variants.

A Link to the Past[edit | edit source]

In A Link to the Past, there is only one shade (red) for the Octoroks. They are much faster than previous Octoroks, and some possess the ability to shoot rocks in four directions quickly. Octoroks only appear in the Light World, though a similar creature (slightly resembling the Ocarina of Time style of Octorok) appears in the Dark World. Signs made to look similar are in a Shooting Gallery. In the Palace of the Four Swords (a bonus dungeon only found in the GBA re-release), there is a dark room with three Golden Octoroks inside.

In this game, they remained the same as in A Link to the Past's. Like those in A Link to the Past, they lack a color difference, and only come in one form. There is also a new type of Octorok called the Flying Octorok. It has large buglike wings, and flies over Link when attacked, much the same way a Stalfos jumps out of harm's way. The best way to defeat one is to run into it with the Sword and Pegasus Boots equipped. As with Stalfos, they won't detect a charged spin attack, giving the player another possibility for defeating them.

Although Octoroks do not make an appearance in this non-canon Zelda game Link does briefly reference the creatures in the opening FMV by commenting "I'm so hungry, I could eat an Octorok!" to the King. However, there is an enemy similar to an Octorok found before talking to Impa at Tykogi Tower, right down to its octopus-like appearance and tendency to spit rocks. 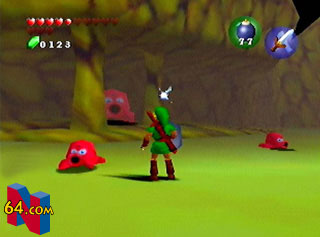 In Ocarina of Time, Octoroks made a drastic change to sea-dwelling creatures. They now sit in place, and wait for a while before firing directly at Link. The only way to defeat them is with a projectile weapon or by deflecting their shots back at them.

There is a mini-boss in this game called Bigocto (Navi identifies the name as being one word), who traps Princess Ruto, and fights with Link by chasing him around a large platform in circles, with a weak spot on his back that must be hit with the Boomerang. It looks very different from the other Octoroks of that game, but bears a similar face. Although it has a mouth similar to the other Octoroks, it appears to lack the ability to shoot rocks.

In this game, they kept Octoroks as sea-dwellers. Like many elements of Majora's Mask, Octoroks and Big Octos were reused from Ocarina of Time. Octoroks are often required to get to various places by freezing them and using them as platforms. There are also two Big Octos guarding caves in a Swamp, and the only way to get rid of them are certain items (such as the Bow & Arrows) and having Koume's boat crash into it as it passes them.

Octoroks are used as targets in the Town Shooting Gallery, with red ones being the desired target and blue ones being the ones to avoid. If the player manages to shoot forty of the fifty targets, they win a quiver upgrade. If all fifty are shot, a piece of heart is won. It should be noted that the blue Octoroks are exclusive to the Town Shooting Gallery and are not found elsewhere in the game. Additionally, you can get the third prize of 20 rupees at the Camera Shop by taking a photo of one of the Big Octos.

Oracle of Ages and Oracle of Seasons[edit | edit source]

Octoroks come in shades of Blue and Red, akin to the original Legend of Zelda's style, and the fact that Blues are more powerful than Reds. Blue enemies appear in the past and during certain seasons, while Red appear in Present time and appear during certain seasons. They look exactly the same as Link's Awakening's Octoroks, because Flagship built these games upon data given to them by Nintendo of LA. In Oracle of Seasons there is one Gold Octorok who appears in Spool Swamp during the Summer. In Oracle of Ages Link must help a Great Fairy that is cursed to live in the form of an Octorok.

In both games, the player can acquire a magical Ring that transforms Link into an Octorok. He cannot use any attacks in this form, but he is ignored by other Octoroks, and also cannot be eaten by Like Likes.

Octoroks appear as random enemies, usually found in Boxes and Barrels, in their sea-dwelling form. They fire Rocks at the player, but the Rocks can be deflected back at them. Also found in Adventure Mode, in the Legend of Zelda Adventure Stage. There is also an Octorok trophy available by random lottery. 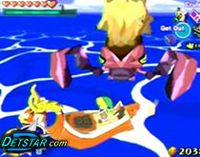 A Sea Octo from The Wind Waker

Octoroks return as sea-dwelling creatures in The Wind Waker. Some Octoroks (blue) lurk around in shallow waters on islands and fire at people, hiding whenever someone comes near, while others (red) dwell in the ocean, firing Bombs from their mouth at random travelers. A rare type of Octorok known as the Big Octo (which look different from the ones in Ocarina of Time and Majora's Mask, insofar as they resemble squid) appears in certain areas, where Seagulls are circling. They await passing boats and create a whirlpool to suck up the boat and Link, launching them far away. The number of eyes they have varies from four, to eight, and even twelve, with more eyes representing stronger Octoroks (since ALL the eyes must be destroyed to defeat the monster). Once slain, the Big Octo leaves an underwater treasure chest which, when fished up, will reveal either a piece of heart or an orange Rupee (there is one exception: One Big Octo has eaten a Great Fairy, and killing it will free the Fairy, who will double your magic meter). The figurine of the Octorok gives it the "perfect attendance award" for being in all of The Legend of Zelda games.

The Octorok sprite from The Legend of Zelda appears on the Figurine Fanatic (Manny)'s pack.

Their appearance most resembles that of The Minish Cap, and they fight in almost exactly the same way, except they can shoot in four directions. There are three varieties: Red, Blue, and Pink, but they are all more or less of equal power. Red and Blue tend to attack individually, with Blue taking multiple hits (each hit causing a slight expansion in size) before they are destroyed. Blues must be repeatedly attacked at a constant rate or they will shrink in size, thus the process of destroying them will have begin again. Pinks tend to attack in swarms and have the ability to rapidly spit rocks in near continuous streams.

They once again return as land-dwelling red and blue Octoroks, with blue being stronger than red. They fire rocks at Link, and through Kinstone fusing, rare Golden Octoroks sometimes appear. These Octoroks are much faster and stronger than regular Octoroks. They also fire rocks, but when they do, they fire three rocks in rapid succession, rather than just one. However they leave behind great wealth if defeated.

Big Octorok (the fourth major boss of the game) is an Octorok who was frozen solid inside the Temple of Droplets. Like with the Giant ChuChus the name is a bit of a misnomer. The Big Octorok is actually a standard sized Octorok, but Link is minish size during the fight. When the player let sun shine into the temple to thaw out the frozen Water Element, the Big Octorok also thawed, and ate the Element (its figurine states that it was frozen for so long it was starving). Along with the normal rock-spitting ability of Octoroks (which is extra powerful due to Link's size), the Big Octorok can transform into a frozen form, and can put out the light by spitting dark clouds of ink.

Octoroks return as relatively unimpressive enemies in this game. They are red with a blue ring around their mouths. The rocks they spit are no longer able to be deflected, however. They take two hits to defeat in this game.