Oddish (ナゾノクサ, Oddish Nazonokusa in original Japanese language versions), also known as Plimp, is one of 493 fictional species of Pokémon in the Pokémon franchise.

The name Oddish is a blend of the words odd, which means strange and peculiar, and radish. Oddish's original Japanese name, Nazonokusa, is a portmanteau of the Japanese words nazono (謎の, nazono), an adjective meaning puzzling, mysterious or enigmatic; and grass (草, kusa). The FireRed Pokedex states that the scientific name for this Pokémon is "Oddium Wanderus".

Oddish looks like a small animated onion/turnip plant. Its body is blue, purple or black with two small feet and red eyes. On top of its head grows a large clump of 5 long green leaves.

Oddish is a nocturnal Pokémon, using moonlight rather than the sun's rays for photosynthesis. During the day, Oddish avoids the sun's heat and brightness by burying itself into the earth, leaving only the leaves on top of its head visible above ground. In this way it disguises itself as a plant, misdirecting its carnivorous diurnal predators.

While buried, Oddish nourishes itself by absorbing nutrients from the soil using its feet, which are said to temporarily change into a root-like structure for this purpose.

If anyone pulls at Oddish's leaves and tries to uproot it while it is buried underground, Oddish will react by shrieking in a cute, high-pitched voice. This mirrors the behavior of the legendary mandrake in a similar situation, although it seems that Oddish's squeaks do not have the same dire consequences as a mandrake's.

Once nightfall comes, exposure to moonlight causes Oddish to become much more active. It extracts itself from the ground, and its extremities change back into the shape of legs. It then proceeds to bathe itself in the moonlight and grow, as well as wander around as far as 1,000 feet (approximately 300 metres) scattering its seeds to propagate the species. With the coming of dawn, the cycle repeats

Oddish is abundant in many of the games. In Pokémon Yellow, it can be found in Routes 12, 13, 14, 15, 24 and 25, while in Pokémon Red it can additionally be found in Routes 5, 6 and 7. Pokémon FireRed adds to the above locations the Berry Forest, the Bond Bridge, the Cape Brink and the Water Path

In Pokémon Silver and Gold, Oddish can be found in Routes 5, 6, 24, 25 and in Ilex Forest. Additionally, the symbol for grass Pokémon in the party was a small Oddish.

In Pokémon Diamond and Pearl Oddish can be found in Routes 229 and 230.

Oddish cannot be found in the wild in Pokémon Blue and Pokémon LeafGreen; it must be obtained by trading or other means.

For a Basic Pokémon with two more stages of evolution Oddish has pretty good stats, especially in terms of special attack. It learns many status-inducing moves such as Poisonpowder, Stun Spore, and Sleep Powder, as well as the somewhat powerful Petal Dance. Even though it can probably hold its own in some battles, Oddish's evolved forms Gloom (Evolves at level 21), Vileplume (Evolves from Gloom with the use of a Leaf Stone), and Bellossom (Evolves from Gloom with the use of a Sun Stone) are usually used instead.

Oddish has made a fair number of appearances, but all of them are more or less cameos. Oddish usually appears as a part of a group of Grass-type Pokémon.

In one notable episode, an Oddish is staying with a number of Hoppip whose owner uses them to predict the weather. The unfortunate Oddish envies the Hoppip for their ability to 'fly' in strong breezes.

Another notable episode was an early one in the first season of the anime; Bulbasaur's Hidden Village. Oddish is staying with a group of previously abandoned or hurt Pokémon taken in by a girl. Both Ash and Misty attempt to catch this Oddish, but Bulbasaur protects it from being caught.

Oddish was one of the Pokémon seen in Pokémon Special during the mass migration of Pokémon at the Seafoam Islands. 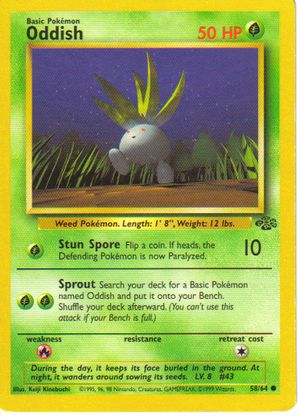 Oddish has appeared in the Pokémon Trading Card Game first in the Jungle series. Since its introduction, it has appeared in several other sets, usually as commonly found cards. Oddish can be found in the following sets: