The nations of Erion had always held an uneasy peace, as the various kings and queens watched each other for any signs of weakness. When the country of Valentine is obliterated by the power of an ancient artifact, it sparks a bloody war between the fairies of Ringford and the warriors of Ragnanival. Little do they know that they are acting out an almost-forgotten prophecy: one that, if fulfilled, will lead to the destruction of the entire world. Take control of the warrior princess Gwendolyn, daughter of Odin, and follow the threads of an intricately woven story as you uncover the truth behind the prophecy – and how to bring it to an end.

Odin Sphere is divided into several chapters, in which the story of one of the five playable characters is progressed. Within each chapter, the player can get information relating to the upcoming mission and buy and sell goods prior to setting off to the next destination. There is an overarching chronological story that is split among the 5 characters, with their individual stories intersecting at places (for example, early on within Gwendolyn's progression, Gwendolyn will fight Velvet, an event duplicated in Velvet's story progression.) As a result, the player will learn the entire picture of the events within the story from each characters' point of view. Only one character story is available at the start, but as the player completes those stories, they will unlock the other characters.

Within each destination is a series of levels connected in a bidirectional graph; these levels include regular combat levels, shop levels, and minor and major boss levels. Regular combat levels have a 1 to 5 star rating indicating their difficulty, allowing a player to opt to avoid a path if it's too difficult at their current ability level. The minor boss will be indicated by a blue "B" and the major boss, a red "B". Defeating the major boss will advance the story to the next chapter. Both combat levels and boss levels also have a fixed reward shown on the area map that can be obtained once with successful completion of the level. A shop level will have a salesman ready to sell and buy goods.

In each regular combat or boss level, if the player has not yet completed that level, they will need to defeat all the foes in order to leave that level. The player will receive a fixed level reward for this, as well as additional rewards for outstanding performance, including using less time to complete the level, and taking minimal damage. Once this is completed, exits to other nodes on the area map will be open for travel. If a player revisits a completed level, they can directly travel to an exit, or wait to fight foes that appear.

Levels are represented in 2D as large circle; the player can continue to run in one direction and will return to the starting point after some seconds of travel. A radar map, similar to the one in Defender, shows the position of the player, enemies, and objects on the level, while a smaller map shows the location of the exits from the level. Combat is similar to many 2D fighting games, though includes a "power bar" representing how many consecutive actions the player has performed without pausing. Should the power bar empty, the player must wait a few moments for the power bar to refill while the character stands vulnerable in an exhausted state; however, a player can refill the power bar faster by stopping actions for a short period of time while still retaining control of the character.

There are three additional aspects to Odin Sphere's gameplay:

Psypher Weapons and Phozons
Each character has a weapon called a "psypher" made of crystals from the Netherworld, which can be used to absorb "phozons" from defeated foes and other sources. As the weapons absorb more Phozons they will increase in power, doing more damage and providing new magic for the player to use. Magic requires consumption of a certain number of Phozons, though does not detract from the Psypher level.

Plants, Food and Cooking
The player has the ability to plant seeds in the current level. Most plant seeds require a fixed number of Phozons to grow (automatically pulling them from defeated foes), and once ripe, they will provide fruit and other items that the player can pick up and use, after which the plant withers and disappears. Food, when eaten, provides experience towards increases in hit points. Food can also be combined through cooking at the "Pooka Village" cafe and restaurant to make better dishes with larger experience gain and additional hit point bonuses. In addition, there are eggs that can be dropped, hatched, and fed seeds to grow chickens that either can be used to gain more eggs, or can be killed to create meat. 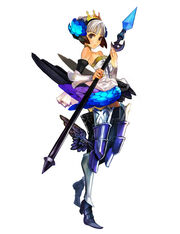 Daughter of the Demon Lord Odin and a Valkyrie princess of the Kingdom of Ragnanival. She is a brave warrior and her name is well known and feared on the battlefield, she has an older sister Griselda who is an even more skilled warrior. Gwendolyn feels she has grown up in her sister's shadow and this has led her to be quiet and reserved, but she will stand up against anyone when necessary. 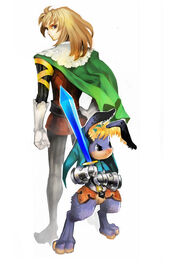 Cornelius is the prince of the kingdom of Titania, a serious young man with a strong sense of justice with views that may be too idealistic for the real world. Cornelius was mysteriously transformed into a beast and taken away from his homeland. He loves Velvet but fears when his journey home is over that she would reject him if she knew what he had become. 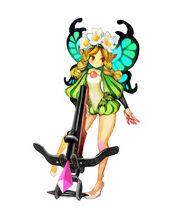 As the princess of the Fairy Kingdom of Ringford she was always looking to prove herself to her mother. After her mothers death she works hard to temper her maturity and strives to equal her mother's strong leadership for the welfare of Ringford. 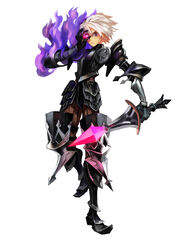 Oswald is feared as the Shadow knight of the fairy kingdom of Ringford, and renowned as a dragon slayer. He was abandoned at a young age and taken in by the nephew of the fairy queen Melvin. Oswald lives to serve his adoptive father and carries out the orders and duties assigned to him with reckless abandon and an unrivaled skill known throughout the land. 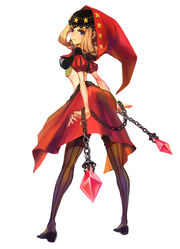 She is the last surviving heir of the fallen kingdom of Valentine. Valentine was destroyed by a magical explosion which is shrouded in mystery. Velvet fled to the forest of Elrit to hide her identity, and became known as the Forest Witch. she now devotes her life to piecing together prophesies in hopes of trying to stop Armageddon. She hates her father Odin because she feels his actions caused the death of her mother.