Odolwa is the boss of the Woodfall Temple, and the first boss in The Legend of Zelda: Majora's Mask. 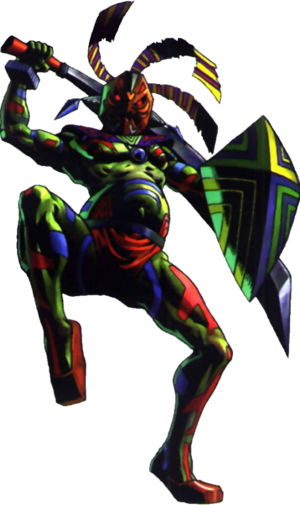 Odolwa appears as the boss of the Woodfall Temple in Majora's Mask. He resembles a fierce tribal warrior: he is very tall, powerful, and agile. He wields a sword and shield. When he is about to attack, he lets out a "chant" (he has three different chants, one for each ability).

If Link comes in contact with Odolwa's body, he takes 1/4th a heart of damage. Odolwa uses a variety of sword attacks such as a forward slash, and a spinning move.

After a little while, Odolwa summons spiders to attack Link which can be killed after one hit.

After awhile, Odolwa uses another ability:a swarm of bugs. These bugs are immune to most damage, except explosives (which they're drawn too). To rid the swarm, Link must set off a bomb, and if done successfully, the swarm is destroyed.

Occasionally, rocks fall from the ceiling and a ring of fire can surround Link (which he is immune in Goron form).

Odolwa can dodge most of Link's attacks (if he's idle or dancing around). Despite this, a bubble shot while wearing the Deku Mask, or an Arrow will stun Odolwa momentarily.

Once Odolwa is defeated, the poison water in Woodfall is restored to normal, the Princess Deku Scrub is returned safely, the octoroks are destroyed and the imprisoned monkey is freed. Link collects Odolwa's remains (his mask), and after he collects all 4 of the temple bosses, he can call upon the help of the Four Giants.