Omanyte resembles a squishy blue ammonite with a white shell. It evolves into Omastar. Omanyte's name is a portmanteau of the English word ammonite, and omu, the Japanese word for nautilus. This is because Omanyte resembles the extinct ammonite. Or the O in Omanyte was received because its shell is circular, similar to the shape of the letter O. In the beta version of Pokémon, Omanyte was known as Ess, and its evolved form was named Kargo. When the two beta names are combined, they form the word Ess-Kargo, a homonym of the French word escargot, meaning snail. (This pun would be later revisited in Pokémon Gold and Silver with the introduction of Magcargo).

In either case, Omanyte is one of the oldest species of Pokémon.

Omanyte is a subterranean Pokémon. It has been described as both an insectivore and a plankton-eating filter feeder by canon sources; it is not certain if one of these sources is incorrect, or if it is capable of both. It has 10 arms, and can use air bladders in its shell to rise and fall in the water.

Omanyte cannot be captured at all; the only way to pick it up is to find the Helix Fossil (in Pokémon Red and Blue, Pokémon Yellow, or Pokémon FireRed and LeafGreen), and 'bring it back to life.' The Helix Fossil can also be found in the Underground in Pokémon Diamond and Pearl after obtaining the National Dex.

It has two special abilities: Swift Swim, which boosts its speed when it is raining, and Shell Armor, which means it cannot suffer critical hits.

In Pokémon Stadium 2 omanyte can be used in the minigame Tumbling Togepi.

Omanyte's first small cameo was the subject of a story Gym Leader Erika was telling the small children during a story circle portion of a supposed tour of her gym.

Omanyte's most notable role is in episode 165, Fossil Fools, in which a small remaining colony of Omanyte and Omastar are threatened by the destruction of the subterranean reservoir.

They also played a role in episode 26 (Pokémon Scent-Sation); however, this role is notable mostly because it was exactly twenty episodes before the Pokémon came back to life (in episode 46, Attack Of The Prehistoric Pokémon).

Additionally, Omanyte played a role in episodes 278 (Ruin With A View) and 293 (Stairway to Devon).

In the Pokémon Special manga, Misty had an Omanyte which she gave to Yellow in Volume 4. Later, it evolves into Omastar. 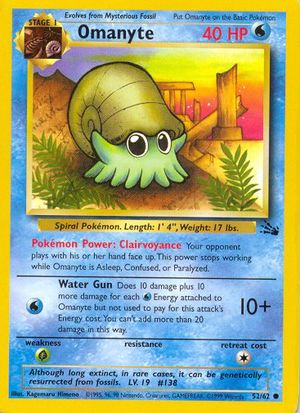 Omanyte, as seen in the Pokémon Trading Card Game

In the Trading Card game Omanyte appears in: