The name "Omastar" derives from the same origins of the name "Omanyte"—the "ammonite", "omu" - the Japanese word for nautilus - and the word "star". Its English name was originally going to be "Kargo" (see Omanyte).

Omastar is an ancient Pokémon which resembles an ammonite. It can withdraw into it is shell to shield its soft, blue flesh from damage and fire volleys of sharp spikes from its outer-shell. It is speculated that Omastar went extinct due to its heavy shell making it too sluggish to capture prey. (Although it was seen running speedily on two legs in "Master of Mirage Pokemon.")

Omastar has a very sharp beak, resembling canine teeth, adorning its mouth. This makes Omastar capable of cracking through the shells and hard hides of other gastropods and crustaceans, such as Shellder, and sucking out their soft innards; (a la moon snail) but not before sedating its prey by constricting them with its long tentacles.

Omastar can only be obtained by evolving it from Omanyte at level 40. In Pokémon Red and Blue and Pokémon Fire Red and Leaf Green, Omanyte must be resurrected from the Helix Fossil item at Cinnabar Island's Pokémon laboratory. This can only be done if the player chose the Helix Fossil instead of the Dome Fossil at Mt. Moon. In Diamond and Pearl it can be found in the underground as a fossil.

Omastar’s high points statistically are its Defense and Special Attacks, and it learns plenty of Water, Rock, and Ice-type moves as well as several defensive and support moves. However, its types make it quadrupally susceptible to a Grass-type attack, a problem compounded by its average HP, Special Defense, and Speed. It is also weak against Electric, Fighting, and Ground attacks.

Omastar first appeared in episode 46, "Attack Of The Prehistoric Pokémon". Omastar and other prehistoric Pokémon (Omanyte, Kabuto, Kabutops & Aerodactyl) were all awoken by an explosion in Grandfather Canyon. This episode is important, as it was the episode where the unhatched egg containing Misty's soon-to-be Togepi was found and Ash's Charmeleon evolved into a Charizard.

It has made several other appearances since then such as in "Pikachu's Vacation" at one point a view of the pool shows an Omastar floating in the background, and also can be seen in a pool within the "Tree of Beginning" in the 8th movie.

In the Pokémon Special manga, Yellow has an Omastar whom she originally obtained from Misty as an Omanyte. 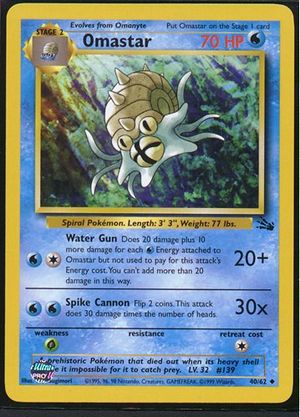 Omastar, as seen in the Pokémon Trading Card Game

Omastar has appeared a healthy number of times in the card game, all as stage-2 types:

The reason Omastar is a Stage 2 Pokémon in the card game while it is Stage 1 in the normal video games is that its pre-evolved form, Omanyte, evolves out of a trainer card (Mysterious Fossil) at the Basic level, making Omanyte Stage 1. The Omanyte and Kabuto families (as well as Aerodactyl) were the first Pokémon cards to evolve from a Trainer card. Since then, only two other species have been discovered to evolve out of trainer cards: Lileep and Anorith.