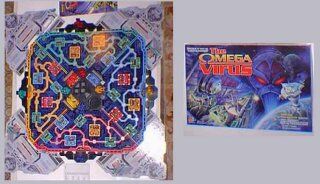 The Omega Virus board game and box.

The Omega Virus is an electronic board game released by the Milton Bradley Company in 1992. It is made to be played alone or with up to three other players; depending on number of players and chosen difficulty level, games can take approximately 35 minutes to complete.

To stop the Omega Virus players must investigate rooms on the Battlesat 1. At the start only Green Key Card rooms are open, but as the commandos explore they will find new Key Cards, a robot probe to double the search effort, or one of the three AVD's (Anti-Virus Device) needed to confront the Omega Virus. Some rooms contain traps that will destroy items in your inventory or teleport you to another part of the station. Marking what events (positive or negative) happen in what rooms in your exploration log will help you locate needed items quickly and avoid previously located traps.

While the main goal is to stop the virus from gaining complete control of the station and destroying humanity each player is also trying to secure the station for their own nation. Players are able to fight against rivals to slow their progress by destroying or stealing objects in their inventory. Of course if no one stops the Omega Virus nobody wins and the human race is wiped out so oftentimes when time is running short players will work together to stop the greater threat.