Onix (イワーク, Iwāku, Iwark in original Japanese language versions) is one of 493 fictional species from the Pokémon franchise. Its name is a portmanteau of onyx, a semi-precious gemstone, and oni, which is a type of demon or magical beast. Its Japanese name is a pun on 岩 iwa (crag/rock).

Onix is a gigantic serpentine Pokémon composed entirely of boulders, but with eyes, a rocky member, and a long flat horn on its head. It is a subterranean creature that bores its way through the ground at a rate of 50 mph (80 km/h) in search of food. The tunnels it leaves behind as it burrows through the earth are used as pre-dug homes by other subterranean Pokémon such as Diglett and Geodude.

Within Onix's member is a structure nigh identical to a magnet, which allows it to determine its heading, its depth underground, and other such information useful for a subterranean Pokémon to know. It acts quite like a compass.

As Onix ages, it burrows deeper underground, and its rocky member becomes progressively harder, rounder, and smoother. Around the age of 100, the pressures exerted on its stone member become so high that it is compressed into a much harder, diamond-like composition, although it is closer to metal in nature. This eventually triggers Onix’s evolution into the even more imposing Steelix.

Onix is commonly found in several cave areas in both Pokémon Red and Blue, and Pokémon Yellow, including Victory Road, and the same is true for Pokémon FireRed and LeafGreen. In Pokémon Gold and Silver, a person in Violet City can trade an Onix for the player’s Bellsprout.

Onix is a highly lopsided Pokémon to use and therefore is never seen in favor of its evolution Steelix in competitive play. It has superb Defense and good Speed as well, offset by horrid offensive stats, HP, Special Defense, and the fact that its Rock/Ground type would only encourage opponents to use Special Attacks on it anyway, most of the time resulting in One-Hit KO’s. It can gain Rock Slide as an egg move and pass it on to Steelix, and it can surprisingly learn Dragonbreath at level 30. Ultimately, Onix’s appeal lies in its evolution to Steelix, which is achieved by trading Onix to another player while it has the Metal Coat item attached.

Onix is rather common among the teams of “boss” trainers in the games: It appears as part of Brock’s team in Pokémon Red and Blue as well as their remakes, Pokémon FireRed & LeafGreen. It is also seen in several instances where the player battles Team Rocket Boss Giovanni, and two Onix are seen in Elite Four member Bruno’s team. In Pokémon Emerald, after defeating the Elite Four there, one can hold a rematch with Rustboro leader Roxanne, who now has an Onix in her team. In Pokemon Pearl and Diamond, the first gym leader, Roark, also has one in his lineup. In all cases, Onix proves to be an easy opponent, especially if any Water or Grass-type moves are available.

In Super Smash Bros., Onix appears as one of several Pokémon which may emerge from thrown Pokéballs, using Rock Throw to rain boulders down on the opponent. It is one of 6 Pokémon who does not return in Super Smash Bros. Melee with Meowth, Starmie, Beedrill, Koffing and Hitmonlee being the others. However, Onix appears as a blimp in the stage "Kanto Skies: Pokéfloats".

Onix can also be recruited and played as in Pokémon Mystery Dungeon.

Similar to how Brock had an Onix, the first gym leader in Pokémon Diamond and Pearl, Roark, also has one in his party of Geodude and Cranidos.

Onix is notable for being the third Pokémon to appear in the anime; in Episode 1, as Ash watched a pair of trainers on TV, one of the trainers (which although hidden in shadow, greatly resembled Bruno of the Elite Four) swapped in an Onix for his Nidorino, which had fallen victim to Hypnosis attack from the other trainer's Gengar.

The first major appearance from an Onix was in Episode 5, when Ash and Pikachu had to defeat Brock's Onix to get the Boulder Badge. Pikachu was unable to defeat it, seeing as Pikachu's electric attacks could not penetrate Onix's rock shell; however, in a rematch, a lightning bolt accidentally set the gym on fire, triggering the automatic sprinkler and weakening Onix, as well as letting Pikachu's electric bolt be magnified by the water covering it. Although Brock could have declared a mismatch due to the circumstances, and Ash refused to accept a badge for winning in that manner, he still decided to award Ash with the Boulder Badge.

The most notable Onix would be Brock's. Brock has had his Onix since Episode 5, until he left it with his brother Forrest in the Pokémon Chronicles episode "A Family That Battles Together Stays Together". Brock's Onix has been used as a racing mount (as in episode 33, "The Flame Pokémon-athon"), a set of impromptu stairs (such as in episode 16, "Pokémon Shipwreck"), and in one episode, as a babysitter. According to "Having a Wailord of a Time," Onix was Brock's first Pokémon, a gift from his father. When Brock returns to Pewter City with Ash and friends during the Battle Frontier Saga, episode 392,"Grating Spaces" it is revealed that his Onix has evolved into a Steelix. A small running gag in the series was the extreme susceptibility of Brock's Onix to water attacks; even a bucket of water thrown onto it by Meowth crippled it quite severely, and Brock was also forced to forfeit the aforementioned Pokémon race due to Onix's hydrophobia. Brock decided to leave it at home to his family for protection.

Seen only in one episode, there seems to be at least one Onix of gigantic proportions. These Onix were at least twice the size of a normal Onix. It is explained that the soil of the mountains the giant Onix live is different from normal soil, causing the Onix to grow larger than normal. At least one has been caught, by Bruno of the Elite Four, although neither it nor its trainer have been seen again.

Also seen in only one episode (Season 2's "The Crystal Onix"), an Onix made entirely of crystal was found to be living in a cave on an island near Sunburst Island in the Orange Archipelago. How it came to be made of crystal instead of rock was not explained, but it has become legendary on the island, having appeared to several glassblowers over the years, inspiring them to create incredibly life-like Pokémon figurettes from glass. This Onix was notable for being immune to water attacks and preferring to dwell in a spring, unlike regular Onix. The Onix was defeated in battle by glassblower Mateo's Charmeleon, but was not captured as was originally intended; it had already provided the inspiration that Mateo sought. It is currently the only known example of such an Onix. This Onix is believed to be a parody of the Diamond/Crystal Onix hoax in the games.

In "Hello, Pumello", an Onix has been used by Drake, the leader of the Orange Crew, in his battle against Ash. Drake had his Onix battle Ash's Squirtle. It dug underground and emerged to grab Squirtle with its tail. Squirtle hid inside its shell and used Hydro Pump on the Onix. After soaking Drake's Onix into submission, Squirtle defeated Onix with its Skull Bash.

Only appearing in "Hooked on Onix" King Onix is the ruler of a kingdom of rock Pokémon, though only members of the Geodude family are seen. He aids Team Rocket in capturing Ash and his friends, but after Ash battles him and wins, Team Rocket betrays the King. Ash protects him, prompting him to turn on the Rockets. After they're defeated, King Onix gives Ash and his friends a ride, helping them get through the mountains. King Onix' signature attack appears to be Iron Tail.

Brock has an Onix in Pokémon Zensho, the Electric Tale of Pikachu, and Pocket Monsters. 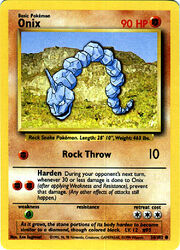 Onix cards were noted for having very high HP among Basic Pokémon, a detail rather interesting because Onix is known for having very low HP in the normal video games. Its appearances were in: