Oppai Slider 2 (おっぱいスライダー２ in Japanese) is a 2005 Japanese sex simulator video game by Illusion, for the PC. Oppai Slider 2 is the second game in the Oppai Slider series, and was released exclusively in Japan. The name contains the Japanese word "oppai" which is a reference to the breast. The second part "slider" corresponds to the players ability to modify the female characters clothes. The player is a blue human avatar which can be male or female. 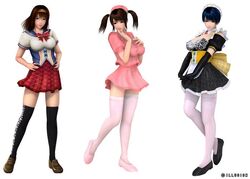 The game consist of three characters a sailor, a nurse, and a maid. Each character has a corresponding background such as a pool, hospital room, and a part of a house. The player gets to choose from multiple male avatars and sometimes a female avatar which would be in blue. Each character has two storylines in their respective environments.

The game play is based around the two mouse buttons and the mouse wheel. The other keys in the game are F1 which are the options and the quit menu, F2 shows the possible storyline paths, F3 shows the map of where items are, and F4 shows which part of the female character the player can interact with. The player starts with one of the characters and is first able to modify the clothing, areola color, breast position, and nipple shape. Unlike previous Illusion soft games the clothes opacity can be modified instead of the style. The player is limited to modifying the clothes to 50% opacity when he starts out. If the player chose a female avatar, the player is able to modify her breast size. When the player enters the environment, the objective is to progress through one of the two three-part storylines. There are two camera modes on the top right corner of the screen which is the female camera (in pink) and the players camera (in blue). The two storylines is dependent on the avatar the player chooses. To progress on the storyline the player must find items in the environment and use them on the female character in a sexual manner. The player is also able to perform various acts of foreplay on the female character. Once the player goes to one of the endings the story part is saved. The different sex positions, actions, and the endings are also saved on a H memory list.

In the second mode of play you are able to choose from the H memory or a posing feature. In H memory mode you are able to choose sex positions and actions you achieved in the six storyline. The player is able to perform a majority of hardcore sex acts in different positions. More positions are unlocked through the different storymodes. This feature also allows you to view the endings that you have achieved. In the mode with the posing feature, the player is able to pose a female in different positions. Aside from adjusting clothes and breasts, the player is also able to adjust the female characters eye expression, facial features, head rotation, eye rotation, background and pose.

After releasing Oppai Slider 2, Illusion soft released a character version 2 file which allows the player to have a character from Sexy Beach and A-GA