Other characters of Command & Conquer

Tratos was the leader of The Forgotten. He originally assisted Kane in translating the mysterious Tacitus device before becoming rescued from captivity by GDI forces. After his rescue, he began to work with the GDI to find a way to stop the spread of Tiberium on the planet and reverse its harmful and mutagenic effects to Earth's native biological life. Tratos eventually developed an experimental cure for Tiberium poisoning at the end of the events in Command & Conquer: Tiberian Sun, however the serum proved to be ineffective after being tested on Umagon. During the events of Firestorm, Tratos was eventually assassinated on CABAL's orders as the AI saw him as a threat to its plans in being the only other sentient capable of translating the Tacitus. His assassination initially caused considerable riots between civilians and mutants, the latter suspecting that GDI was trying to kill them by poisoning food and water. Following Tratos' assassination, GDI leaders were forced to reactivate CABAL in order to be able to translate the Tacitus, which would directly lead to the events seen in the Firestorm expansion pack. 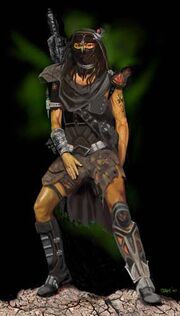 One of the fiercest warriors of the Forgotten and favourite underling of Tratos, Umagon is an excellent hand-to-hand fighter. She was subject to extreme Tiberium exposure, which turned her into a mutant.

Little is known about her prior to her encounter with GDI forces in Tiberian Sun. She penetrated a crashed Scrin spacecraft and was encountered by GDI commanders Michael McNeil and Chandra, when they were exploring the interior of the strange ship. Eventually, she struck a deal with the Global Defence Initiative, trading General Vega's location in return for saving Tratos, the Forgotten's leader.

She would eventually serve as a sort of ambassador of the Forgotten to GDI, aiding Commander McNeil with advice, providing tactical information or even pinpointing the location of the prototype fighter manufacturing plant. Unfortunately, she was captured by Nod following the last assignment, and taken to Kane's headquarters in Cairo, where she'd be subject to the Divination process.

The process could not have been completed however, as McNeil rescued Umagon and Tratos administered an experimental Tiberium mutation antidote to her. However, this would prove to be an error, as the antidote caused her to mutate horribly and forced Tratos to confine her to a straitjacket in a padded cell. She is assumed to have died of the mutations shortly after Firestorm began.

The Ghoststalker is a member of The Forgotten and a mutant commando. He sided with the Global Defense Initiative during the events of the Second Tiberium War when his kin Umagon struck a deal with Commander Michael McNeil, offering his aid and support on numerous missions against the Brotherhood of Nod which included assistance in rescuing Tratos and destroying a large power grid powering the facility of Nod's new fighter prototype. In the final stages of the war he managed to pinpoint Kane's location for GDI, as well as confirm the location of Umagon (she was captured following the destruction of the fighter facility) and the existence of the Brotherhood's world-altering Tiberium missile. He also played a role in GDI successfully retrieving the mysterious Tacitus device during the events in Firestorm. His final fate, however, is unknown.

Ghost Stalker was armed with a powerful railgun, similar to but weaker than the one mounted on the Mammoth Mk. II, as well as C-4 charges, allowing him to be a threat to any and all enemies on the battlefield.

He was portrayed by Gil Birmingham.

A member of The Forgotten, the mutant hijacker was the fastest infantry unit in Tiberian Sun. The hijacker carried no weapon, but possessed the ability to hijack enemy vehicles and certain civilian vehicles, converting them to his side. A mutant hijacker would remain in a vehicle until it is destroyed, and when that occurred, the hijacker returned to the battlefield, ready to commandeer another vehicle. In the campaign, the unit was playable in GDI missions, but in skirmish and multiplayer the unit could only be created by Nod forces. Like the Ghost Stalker, there is no background on who the hijacker is (the reason for this is that you could only train one hijacker per game, although this might be done purely for balance reasons). With a hijacker, one can control 2 Mammoth MKII by constructing one and then taking control of another. However, the former and latter must be done in this order or the program will count the hijacked Mammoth MKII as the one the player built.

Nikoomba was a petty warlord in Africa during the First Tiberium War. His views did not coincide with the Brotherhood's and as such, he was marked for removal by Seth, Kane's right hand at the time.

President of the United States of America at the time of Tiberian Dawn.

Attorney-General of the United States of America at the time of Tiberian Dawn.