From Codex Gamicus
(Redirected from Ouya)
Jump to: navigation, search

The Ouya is a video game console running its own version of the Android operating system. The console project was founded by Jilie Uhrman, a game industry venteran, in 2012. Joined by dsigner Yves Béhar and product manager Muffi Ghaiali. Development was funded from a successful crowd-funding campaign on Kickstarter.

The Ouya will feature an exclusive Ouya store for applications and games designed speicifcally for the platform. The console will include a built-in TwitchTV application and access to the OnLive video game streaming service. The hardware design of the Ouya allows for easy opening, allowing easy access to moding and possible hardware addons.

All systems can be used as development kits for the Ouya,. All games will be required to have some element of a free-to-play aspect, whether that involved being a completely free game, free trial, or purchasable upgrades, levels, or items. 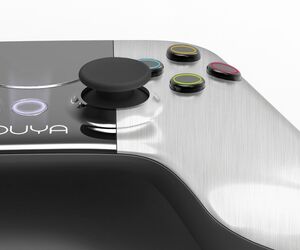 The Ouya Controller as advertised

Since its release, the OUYA has had several limited time special editions. Here they are: